Home » The Looptail, The Travel Blog Powered By G Adventures » 5 things you should know about Tibetan prayer flags
× Share this Article

5 things you should know about Tibetan prayer flags

The annual Saga Dawa Festival, which takes place in Tibet, is the most important religious festivals in the country. The festival is celebrated to commemorate when Sakyamuni (Buddha) attained enlightenment, and is typically observed by visiting temples, lighting lanterns and practising kindness and generosity. One of the most significant events of Saga Dawa is the replacing of the Tarboche Flagpole, a famous flagpole draped in Tibetan prayer flags that stands on the sacred mountain of Kailash. Here, five important facts about those important flags:

1. They're steeped in Buddhist tradition

According to Buddhist legend, the first prayer flags were used by Gautama Buddha, on whose teachings Buddhism is founded. Devas, which in Buddhism are a type of god-like, non-human entity, would carry flags with Gautama Buddha's prayers written on them into battle with asuras, which are a type of demi-god.

Tibetan prayer flags are bright and beautiful, but their colours aren't just for show. Each hue signifies an element — and the flags are always arranged in a specific order, from left to right: blue, white, red, green, yellow. Blue represents the sky, white represents the air, red symbolizes fire, green symbolizes water, and yellow symbolizes earth. All five colours together signify balance.

3. The flags don't carry mantras to the gods

This is a common misconception: rather, the mantras printed on the flags are carried on the wind and believed to spread goodwill and positive energy wherever they go.

4. There's more than one type of flag

While the square-shaped, horizontally strung prayer flags are arguably the most common, they aren't the only variety of Tibetan prayer flag you'll see being used at sacred sites and on significant calendar dates. Those flags are called lung dar prayer flags. Flags that fly vertically, which are less common, are known as dar cho or dar chen flags.

You don't have to be a Bhuddist to hang prayer flags, but there is a right way to hang them. While stringing your flags up wherever you choose to display them, it's important to keep good, selfless motivations in mind, in keeping with the flags' ultimate purpose, which is spreading positivity far and wide. 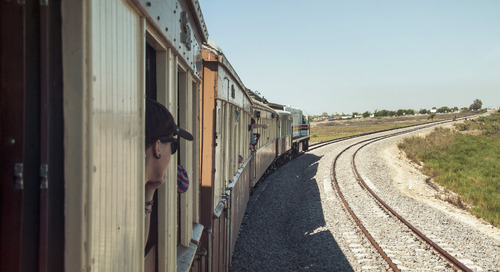 10 reasons to travel by train

From convenience to cost, getting there by rail is a great — and scenic — option How to satisfy your culture craving on Greece's beautiful Mediterranean isles