Home » The Looptail, The Travel Blog Powered By G Adventures » A guide to Moscow's stunning cathedrals
× Share this Article

A guide to Moscow's stunning cathedrals

Kyrgyzstan is one of our Where to Travel destinations for 2018. Click here to see the full list!

Russia has the highest number of Orthodox Christians in the entire world, totalling close to 101 million people. It’s no wonder the country is home to so many majestic churches and cathedrals. And the Russian capital, Moscow, is naturally where all the country’s biggest and most lavish monuments are located.

The architecture of Russia’s religious buildings vary in style, from Baroque to extravagant Renaissance-style to traditional Russian. And while they look different from one another, there are some features they all share: gold turrets, fresco paintings, colourful mosaics, and the most distinguishable of all, the onion domes. Here are some of the must-sees:

Let’s begin at the historical and spiritual centre of Moscow, Red Square. This was once the focal point of the Orthodox Church, and also the control centre for Russia's political parties. There are a few Cathedrals and churches right on the square, but the most prominent building of them all is the whimsical Saint Basil’s Cathedral, which has become an icon of Moscow. Constructed between 1555 and 1561, this UNESCO World Heritage Site is now a museum that’s open to the public. Legend has it that Tsar Ivan the Terrible, upon seeing Saint Basil’s for the first time, demanded that the architect’s eyes be cut out so he could never create anything so beautiful again.

Just a short walk away on the northeastern corner of the Red Square stands Kazan Cathedral, formally known as the "Cathedral of Our Lady of Kazan.” It is dedicated to Our Lady of Kazan, the most venerated icon of Russia. Despite its small size, the Cathedral has a unique architecture: featuring a one-domed structure, several tiers of kokoshnik, and a tented belfry.

Kazan Cathedral was once considered one of the most important churches in Moscow. The current building is a reconstruction of the original church, which was destroyed under the orders of Stalin in 1936.

Cathedral of the Dormition

Next, head inside the Moscow Kremlin complex, just off the Red Square, to find some of Russia’s most impressive religious buildings. The Cathedral of the Dormition, also known as the Cathedral of the Assumption, is the oldest church in Kremlin. The Cathedral is regarded as the mother church of Muscovite Russia, and the most important church in Russia’s history. The current structure has been standing since 1479, and it’s hoted the coronation of every Russian monarch from 1547 to 1896.

Next to the Cathedral of the Formation stands Ivan the Great Bell Tower, which was built in 1508 to serve the three cathedrals surrounding it. The church tower was erected by Grand Duke Ivan Kalita and, at 81 metres high, it was once the tallest structure in the city: construction of buildings taller than that was forbidden. Its 21 bells served the purpose of sounding the alarm if any enemy was approaching. And the largest bell in the world‚ with both a height and diameter of more than six metres — is found here, as well.

The Cathedral of Christ the Saviour

Poised on the bank of the Moskva River, just under two kilometres from the Red Square, is this cathedral, which is the tallest Orthodox Christian church in the world. With its stark white exterior and vertical turrets topped by golden domes, the Cathedral of Christ the Saviour (Khram Khrista Spasitelya in Russian) is the second most prominent religious building in Moscow.

Unlike Saint Basil’s, this cathedral still hosts daily worship services, with a capacity to hold more than 1,000 congregants.

Like many of Moscow's other cathedrals, today's Cathedral of Christ the Saviour is a restored version of the original church, which was built during the 19th century but destroyed in 1931 by Stalin. The atheist Soviet government demolished it to make way for a colossal palace to house the country’s legislature, but construction was halted by the invasion of Nazi Germany.

Follow the Moskva River south and you’ll find yourself in the Khamovniki district. The Church of Saint Nicholas is a late 17th-century building that displays great examples of late Muscovite Baroque architectural styles. It’s one of the numerous bonfire temples in Moscow, featuring kokoshnik-type gables and crowns.

The first records of this church date back to 1625. The main five-domed church was built between 1679–1682, and the bell tower and refectory were completed around 1694. The church was severely damaged by a fire in 1812, and reopened in 1849.

Continue further south and you’ll spot the Novodevichy Convent. With its unique red exterior and crown towers, it’s easy to see why it’s one of the best known religious complexes in Moscow.

Its name is misleading: Novodevichy isn't a convent, but rather, a cloister made up of a Cathedral, several churches, a refectory, and residential quarters. Unlike other Moscow cloisters, it has remained virtually intact since the 17th century. It was proclaimed a UNESCO World Heritage Site in 2004.

Ready to see Moscow's many cathedrals for yourself? G Adventure can get you there. Check out our small group tours to Russia here. 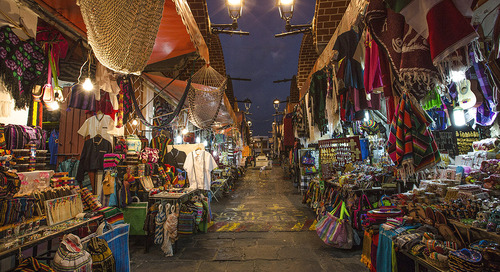 Go beyond the beach

From the Great Barrier Reef to the Amazon, the planet boasts no shortage of natural wonder