Home » The Looptail, The Travel Blog Powered By G Adventures » Feel it all on a five senses Costa Rica tour
× Share this Article

Sensory delights abound in a country known for slow-moving sloths, kaleidoscopic flora and fauna and volcanic landscapes. Come along as we share hot tips, not-to-be-missed experiences and foods to try as you make your way through the biologically diverse jungles, beaches and rainforests.

Abundant flora: As one of the most biologically diverse countries in the world, there’s no shortage of jungle green foliage and tropical flowers to behold. Even better, a good chunk of its natural beauty is protected in national parks. Feast your eyes on more than 9000 flowering plants and 800-plus species of ferns as you move through 12 different ecosystems like tropical wetlands, dense jungle and cloud forests.

Colourful fauna: Not to be outdone by plant life, the birds, insects, and animals of Costa Rica dazzle at every turn. One of their most famous birds is called the Resplendent Quetzal and it’s magnificent from its fluffy crown down to its trailing tail feathers. You can also look for iridescent Blue Morphos (one of the world’s largest butterflies), white-faced capuchin monkeys, scarlet macaws and every colour of tree frog.

Arenal volcano: With its symmetrical shape and surrounding greenery, Arenal Volcano is the model for every school science project. At around 7000 years old it’s considered young by seismic standards and was actively spewing lava and ash up until July 2010. It’s resting now (shhhhhh) but not before destroying three small villages in 1968. These days you can marvel at its impressive cone while chasing waterfalls, riding horses and soaking in hot springs.

Gallo pinto: Translating to “spotted rooster” in Spanish, this rice and beans dish is a daily staple with two main regional variations. It’s often served for breakfast with a fried egg and plantains on the side. You’re going to want a bottle of Lizano Sauce (think worcestershire but better) in reach but rest assured that it’s on the table already.

Refresco: In a hot and humid country, staying hydrated is key. Here comes the refresco, a fresh fruit blended with ice beverage, to save the day. Mangoes! Bananas! Pineapples! The trees are dripping with every fruit imaginable including papaya, passionfruit and guava so it makes sense to whip them into a cold smoothie.

Casado: As traditional as it gets, this dish translates to “married man”. You’ll hear every story behind its name and origins, but basically it’s a balanced meal of rice, beans, meat and salad. What’s on your plate varies by soda (local restaurant) and can include all kinds of sides like plantain, fries, and avocado. It’s an energizing meal much like the ones local people (aka Ticos) make for their own families. Yum!

Coffee beans: It’s a truth universally acknowledged that coffee smells (and tastes) fantastic. Now imagine yourself in a place where the soil, climate and altitude make for the perfect cup. In the Central Valley of Costa Rica you can visit Mi Cafecito, a community tourism project supported by our non-profit partner, Planeterra. Nestled on the slopes of Poás Volcano, this cooperative shows you every aromatic step of making damn good coffee.

Tropical flowers: If you want to catch the light floral scent of Costa Rica’s national flower, make sure you’re there between January and April. The Guaria Morada is a shimmery purple orchid grown mostly at elevations between 1500 and 3000 feet. It’s an air plant that sprouts on tree branches in the wild or planted in front yards for good luck. There are more than 1400 orchid species and you can sniff about 500 of them in the Monteverde Orchid Garden.

Cloud forests: What does a cloud forest smell like? Fresh. Earthy. Verdant. Have you ever jammed your nose in a mossy terrarium after a light misting? It’s that but much better. Sitting at a higher elevation than a rainforest, you walk through low-hanging clouds under a thick jungle canopy. It’s cool but humid and everything is wet. Inhale deeply as you stroll among trees covered in lichens and bromeliads while looking for monkeys, sloths and birds.

Howler monkeys: Costa Rica is home to four monkey species: squirrel, spider, capuchin and howler. As the loudest land animal, howler monkeys are exactly as advertised and sound like a wild pack of chain-smoking dogs. It’s thrilling even if they tend to show off their manly vocal skills at the crack of dawn. You probably need to get up anyway.

Spanish rhythms: Modern music aside, it’s the traditional rhythms of calypso, salsa, meringue, cumbia and bolero that get everyone’s feet moving on the dancefloor. On the folk side, you can hear indigenous Costa Rican, Spanish and African influences combine in instruments like the ocarina and marimba. In Guanacaste, a traditional musical hotspot, trumpet meets marimba to create a lively marching-band style designed for dancing.

Pounding surf: Whether it’s soft, lulling waves or thundering barrels, everyone loves the sound of the ocean as it meets the beach. Want to ride those waves? You’re in luck as Costa Rica boasts two coastlines and both feature a ton of popular surf breaks like Playa Tamarindo, Playa Hermosa and Salsa Brava. Just want to chill out? Try quieter local spots like the beaches inside Manuel Antonio park, Playa Biesanz or Playa Carillo instead.

Rain on your face: We mentioned the sensory experience of walking through a misty cloud forest, but there are also full-on deluges to consider. Costa Rica’s rainy season is from May to mid-November with September and October being the wettest. Don’t let that put you off completely though as it rarely rains all day and there are less tourists.

Your heart pumping: Whitewater rafting, ziplining, spelunking, surfing and more — Costa Rica knows how to get your adrenaline flowing. Feel your heart beating through your chest as you swing through the jungle canopy or plunge into wild river rapids. Adventure in all its forms is easy to access and enjoy in activity hubs like La Fortuna.

Healing mud and water: In a place with more than 200 volcanic formations, it’s not hard to find a natural hot spring or therapeutic mud bath. At Rincón de la Vieja National Park, you can hike to a bubbling mud pool to exfoliate and then rinse off at a nearby thermal spring. Your skin will feel rejuvenated and everything will feel right with the world again.

Ready to feel it all on a five senses tour of Costa Rica? We've got lots of good ones like:
Costa Rica Quest
Costa Rica Adventure
Trek Hidden Costa Rica 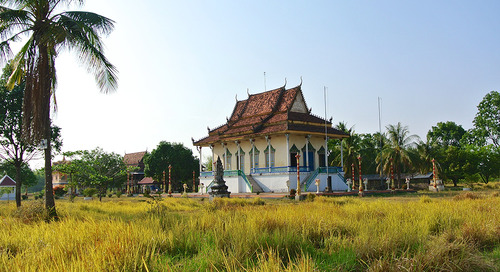