Home » The Looptail, The Travel Blog Powered By G Adventures » Is there a lederhosen renaissance afoot in Germany? We investigate
× Share this Article

Is there a lederhosen renaissance afoot in Germany? We investigate

I was walking along Munich's Platzl, enjoying the twilit cobblestones and the contrast between the busy, awninged sidewalk cafes and bars and the blank planes of the Modernist storeys above them in the post-war design salad that every major German city tosses at you, when three men in their twenties strode by in Lederhosen, those charming German culottes made of skin-tight leather and often embroidered and studded with various decorations. They were laughing and roughhousing, and I figured given the fact that we were in the historic centre of a well-touristed city, that these guys were just getting off shift at some attraction or other that needed them to look like Bavarians for visitors.

I was headed towards one of the biggest tourist attractions in the city myself, the Hofbräuhaus, the state-owned beer hall (state-owned: gotta love the Germans). Built in 1589 and originally attached to a brewery, it survived the bombing when much that had been attached to it was destroyed. So it’s proper old.

But then I saw the lederhosen boys sitting at a table across the hall. I actually wasn’t even facing them, and might not have seen them if one of them hadn’t stood up on his bench and started singing along to the music. Then another guy did the same thing, a few tables down. He was also wearing lederhosen.

It took me less than a minute to decide they couldn’t be plants meant to entertain us. Too many of my tablemates were speaking Bayerische Deutsch, for one thing. And they weren’t nearly good enough singers to have been hired to sing for tourists. These guys were real, as were the women I then noticed sprinkled around the place in their Dirndls, whom I’d first mistaken for waitresses.

Once I’d dealt with the Putsch undertones (though the now-demolished beer hall in question was 15-minute walk southeast of the Hofbräuhaus, Hitler had his first meeting with the future Nazi charter members in a room just upstairs here in 1920), the presence of people wearing what I’d assumed were purely historical costumes — the traditional garb that is collectively known as Trachten — made the whole experience a good deal less ambivalent. It was traditional, but it was a tradition actual Müncheners still enjoyed themselves.

Over the next few days, I started noticing them everywhere. Mostly people in their teens and twenties, but sometimes a bit older. Some were out for an evening, but others just seemed to be going about their midday business. I felt like I’d overheard two Irish people saying “top o’ th’ mornin’” to each other. It was unadulterated touristic glee.

Munich has since become one of my favourite places to go, and I’ve been back four or five times since that night at the Hofbräuhaus. I’ve since been in department stores with entire floors devoted to Trachten, and stopped at roadside Tracht shops and pawed through racks of lederhosen with varying levels of decoration and craftsmanship, and discovered you can get them for anything from about €50 to well into the hundreds.

The last time I was in Munich, checking out a cool new west-end neighbourhood given touristic focus by a new high-design hotel called Roomers, a tour guide explained that the Trachten phenomenon was real, but that it had gone underground for a few decades after the war. According to her, it started popping up all over the place in the '90s for reasons neither she nor, she said anyone else really understands but must have something to do with the Berlin Wall, the 50th anniversary of the end of the war, and the imminent death of everyone’s nefarious grandparents.

Daniel Welte, who’s sold Trachten at Steindl since the place opened 15 years ago to cater to the revival, says he has no idea why things started picking up when it did. He’s originally from Bregenz, Austria, but he figures the drop-off after the war probably had a lot to do with the fact that no one had any money. “But in the country,” he says, “the really traditional people would always wear it on Sunday in church.” And they still do.

Usually, this sort of urban reversion to tradition would signal an imminent political reversion to what some political leader or other would be bound to call whatever the German equivalent of “good old-fashioned values.” Clearly, that’s not happened in Germany. Why is anyone’s guess, though Welte may offer a clue. When I asked him why he thought urban young people were going back to old-fashioned clothing, his reaction was immediate and emphatic: “Traditional is not old-fashioned!”

Word to the wise: Tourists can buy Trachten, too (and Welte, perhaps predictably, suggests you don’t go cheap and look, as he dissuasively describes it, like a carnival act). But if you do, wait till you get home to wear them. Trachten aren’t costumes.

Keen on picking up some Trachten for yourself? G Adventures can get you there. Check out our small group tours to Germany here. 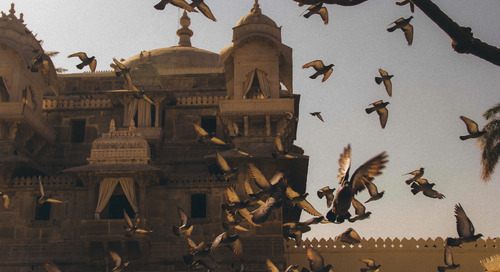 An idyllic afternoon with the artisans of Udaipur

How to visit four of the 20th century's most historic sites

From the Berlin Wall to the beaches of Normandy, here's how to learn about history firsthand