Home » The Looptail, The Travel Blog Powered By G Adventures » Island hopping in the Cyclades
× Share this Article

Over the course of a week, I managed to hop through three different Greek islands in the Cyclades of the Aegean Sea. There are dozens of Greek islands to choose from, each of which have their own personality. And they are much unlike the mainland — there is a serene calm to perusing the cobblestone streets, the sky is a potent cobalt blue, and there is, for the most part, an overwhelming sense of quiet. The three islands of Mykonos, Paros, and Delos could be compared to certain neighbourhoods in New York City. Mykonos is the glamourous Manhattan, lined with Gucci shops and high-end restaurants; Paros, is like Brooklyn, and has more grit and less pomp; while Delos, an ancient archaeological site, is simply a stride through Central Park. Here are the must-sees, all without taking the L-train.

Mykonos is known as a floating party island — a close second to Ibiza, which some say has lost its magic. It’s been a jet-set escape since Jackie Onassis first visited in the 1960s, where she met the famed island mascot, the pelican. But it’s more than just a haven for yachts and champagne. There are some low-key hotspots outside of the loud tourist crowd, including the Alchemist concept shop, which looks like a scene out of Star Wars with its sleek, modular interior design and racks lined with European designers, like Sandrine Philippe from Paris. A quick stroll into the Kastro district reveals the picturesque 17th-century architectural icon, the Panagia Paraportiani church. The Super Paradise Beach is the perfect place to watch the waves, dive in, and order a pizza from one of the nearby restaurants. For something quieter, the beach at the JackieO’ bar has sunbeds, Wi-Fi, and a private garden; they also recently opened a new pop-up shop by British designer Neil Barrett.

For eats, Ling Ling by Hakkasan in the Old Town fuses Asian treats with local cuisine in a minimal chic den, offering steamed dim sum with lobster and seabass dumplings. The classic Remezzo restaurant serves traditional Mediterranean, like Greek moussaka. For those looking to dance the night away, Cavo Paradiso is the ultimate booming techno nightclub perched atop a rocky cliff with two bars and an outdoor swimming public pool. Expect music until sunrise (it closes at 10 a.m.) with DJ sets by Nina Kraviz, Tiesto, and Richie Hawtin, and don’t miss the promoters on the streets offering free guest list spots, it saves you €30.00.

Paros is less touristy than Mykonos, and very chill. And its luscious landscape never fails to impress nature seekers. There’s lots of adventure on this island, as much of it is still untouched. The Valley of the Butterflies features hundreds of butterflies settled in the trees. The best part is watching the red, orange, and brown butterflies flock, which creates a fiery rainbow in the sky. If you rent a scooter, it’s a fun ride to the top of the mountain points, which have various monasteries and stunning views of the island. For a day trip, the neighbouring island of Antiparos has a sea cave that was a site of worship in ancient times.

With an altar covered in gold, and a stunning courtyard covered with foliage, the Church of 100 Doors set in Pairika, the island’s main village, is said to be the oldest church of the Cyclades (it’s from the 6th century). A walk up the hill shows the Frankish Castle, a 12th century stone castle built by the Venetians. It’s the perfect place to watch the sunset dip into the other nearby islands. A hidden gem is the Archaeological Museum of Paros, which offers a look into classical history with pottery and sculpture from the Neolithic era. Its courtyard has dozens of ancient architectural ruins, including a mosaic floor from the Roman era. A common favourite for dining is the Albatros restaurant — a stroll from the main port — which specializes in the traditional Greek spinach pie, spanakopita and a fresh Greek salad made with the local Paros goat cheese called mizithra. For a more indulgent dinner, the Ephessus restaurant features Greek and Anatolian cuisine under a charming set of trees that face the ocean. The district of Naoussa is home to the island’s nightlife, with clubs and bars like The Beer House, which is set in a cavernous 16th-century building, which serves 50 Greek beers, including the local Paros beer, “56.”

Delos is known as an important archaeological site filled with archaic, Hellenistic, and classical ruins. In mythology, this is also where the twin gods Apollo and Artemis were born. The real highlight is the climb to the top of Mount Kynthos, which takes less than half an hour, and features a great view of the island. Upon arrival, a guide offers a map outlining the ruins, and visitors group together with tour guides. Some of the ruins include a 6,000-seat amphitheatre, the Pool of the Minoan Fountain, and the Lion Terrace, where nine lion sculptures guard the island’s sacred entranceway. A former religious centre during 1 B.C., there are several Doric temples and the Archaeological Museum of Delos, which houses tapestries, paintings, and ancient jewellery. The smallest island of the Cyclades, it remains uninhabited and nobody is ever allowed to stay overnight here, according to instructions from the ancient Gods, which they still obey today.

G Adventures runs a number of departures in the Greek islands encompassing a wide range of departure dates and activities to cater to different tastes. We’re thrilled at the prospect of showing you this big blue planet of ours — check out our small group trips here. 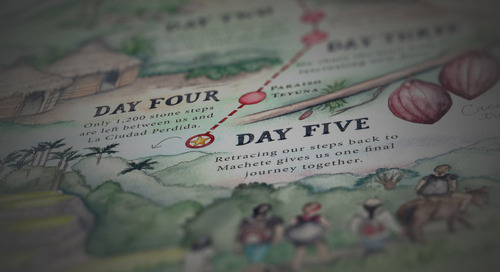 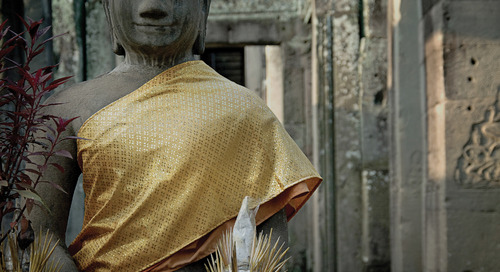 Beyond Angkor: 7 other amazing things to do in Siem Reap

Join award-winning travel writer Jodi Ettenberg as she shows us why Cambodia's Siem Reap is much more than ...