When the Spanish conquistadors toppled the Inca empire in the 1530s, they set about trying to remake the great civilization of the Andes in their own image. Catholicism was in, and sun worship was banned. But even as the newcomers rebuilt the Inca capital of Cusco, they couldn't help but adopt or incorporate traditional themes in their architecture — the fruits of which can still be seen on a tour of the city today.

It was common practice to destroy the symbolic sites of the conquered, but Inca buildings were so monumental — and so elegant in their stonework — that this wasn't always possible. The fortress of Sacsayhuaman was partially demolished and its stone reused, but other buildings' fates were different.

Famously, Koricancha, the most important temple in the city whose walls were covered in gold sheets to glorify the sun god Inti, was simply built around (and atop). Its finely dressed stone walls and arcades now form the base and cloisters of the Church of Santo Domingo. So clever is Koricancha's building technique of interlocking stones that when Cusco was hit by an earthquake a century after the Spanish conquest, the church on top was turned to rubble while the Inca temple below remained intact.

Koricancha displays the classic Inca architecture of enormous block work pierced by trapezoid windows. This is a motif that's repeated constantly across the historic centre of Cusco. When walking around Plaza de Armas and along Avenue el Sol, don't be surprised if you come across sections of Inca stonework, or colonial buildings using Inca stone walls as foundations. Many buildings also have a particularly chunky form around the doors and windows, as if having organically absorbed the Inca vernacular.

Even when the Spanish tried to build in a purely European manner, Inca influences crept in. Cusco's gorgeous cathedral overlooking the main square is a textbook example. Built on the site of a demolished Inca palace, the cathedral shows all the high drama of Gothic-Renaissance architecture. But when you look closer, ancient elements start to creep in. The altar, the tallest in the country, echoes Inca altars, and visitors are greeted by a carved jaguar as they cross the threshold. In their efforts to convert the Inca, the Spanish even adapted their own iconography to suit local tastes — statues of the Virgin Mary wear triangular Inca dresses, and the Holy Spirit takes the form of a goose in a nod to the old Inca sky god. In a painting of the Last Supper, Christ even presides over a meal of roast guinea pig — with the disciples looking just as skeptical as a foreign visitor today might.

Every year, Cusco still celebrates Inti Raymi, the Inca festival of the Winter Solstice, which venerates the sun. But a visit at any time of year shows that, despite the best efforts of the conquistadors, traces of the Inca are still written all over the city.

Want to go hunting for Inca architecture in downtown Cusco? G Adventures can get you there. Check out our small group tours to Peru here. 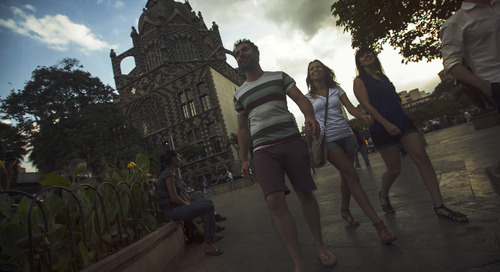 When travelling overwhelms, reconnect with your roots 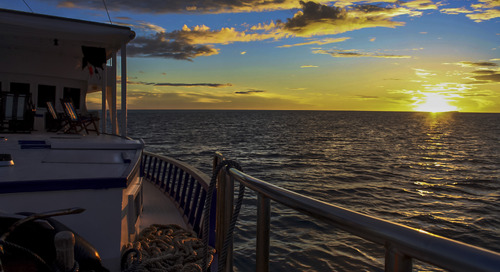 A new reef every day!