Home » The Looptail, The Travel Blog Powered By G Adventures » The 10 coolest castles in Europe
× Share this Article

European museums are one thing, but castles are another entirely. Instead of roaming through the Louvre in Paris, why not take a day trip to the Old World castles that line the continent’s countryside? For a walk back in time, these lesser-known castles are a world away from the tourist crowds:

If you’ve ever been to Lisbon and wondered what that building was at the top of the city’s largest hilltop, it’s a medieval castle that cannot be missed. The Castelo de Sao Jorge is more than just a half-day stroll, it’s an archaeological site that dates back to the 11th century. A fortified castle with a princess-like tower, a drawbridge and a stunning view of the city, expect to find manicured gardens, flower gardens and medieval events. The best part? It’s all free.

This 18th century castle is known as the inspiration for Walt Disney’s Disneyworld. Set at the top of a hill overlooking the village of Hohenschwangau, the castle was commissioned by Ludwig II of Bavaria, Today, this Romanesque castle still stands as a homage to classical composer Richard Wagner. From the palatial Throne Hall to the gold-gilded Dining Room, the paintings show what a legend the German composer really was to classical music.

Set in the southern region of Austria, this Baroque palace home to a family of peacocks who roam the gardens freely. The palace’s architecture astronomy and there are wall paintings devoted to Greek mythology. Inside the state rooms, see old fashioned furniture, clothing and hand-painted vases that shed light on life under the empire.

The two Baroque palaces on this premise will take your breath away. The Orangery is known for its tall windows and gold-framed oil portraits of royalty. Meanwhile, the Palace Stables shows what life was like for the Prince Eugene of Savoy, who lived here in the summer. The gardens here are styled after Versailles and the marble sculptures tell stories about famed historical figures.

This palace is where the Swedish monarch still lives in today. In over 1,400 state rooms, find apartments for the royal family, a ballroom and a chapel. There is also a grand library with books dating back 200 years. The nearby café offers a stunning view of the skyline.

Also known as the Royal House of Norway, this is where the royal monarchy does its day-to-day doings. During the summer months, this castle is open to the public and features minimalist, often nautical-themed Nordic-designed state rooms. The front gates and architecture are lit up at night in various colors.

This small medieval castle is the northern countryside of Luxembourg. Dating back to the 10th century, this castle was built in the Romanesque style and was the seat of power of the Grand Duke of Luxembourg. From spiral staircases to torches lighting up spooky hallways and a cavernous dungeon, the drawbridge is still intact today. The view of nearby nature is what makes it magical.

This classic Baroque palace features over 1,400 state rooms, from bedroom chambers with silk sheets to meeting rooms for royalty. One of the largest palaces in Europe, one can get lost in its 300-year history. The Great Gallery has gold-gilded walls, while the Palm House greenhouse features over 1,000 kinds of plants, from roses to palm trees.

Though technically not the castle once inhabited by Vlad the Impaler, the apparent inspiration for the fictitious Dracula, this Romanian castle is often referred to as Dracula's Castle — not least of all because it is situated on the border of Transylvania. It's dark, stately, and definitely spooky-looking — the perfect setting for our Dracula's Halloween Party, if we do say so.

This classic palace cannot be missed. With daily bus routes from Paris, it’s only a 45 minute ride from the French capital. Though most of us know it as where Sofia Coppola filmed her 2006 film, Marie Antoinette, this elegant palace first opened in the 1600s, ruled by King Louis XIV. Though its smaller than you might suspect, the back garden goes on for miles. Inside, its filled with Baroque and Rococo objects, marble staircases and the famed Venetian mirror room, which dates back to a time when Venetians were the only ones to produce mirrors.

An ode to the humble spud: The best potato dishes in Europe

Think beyond the French fry 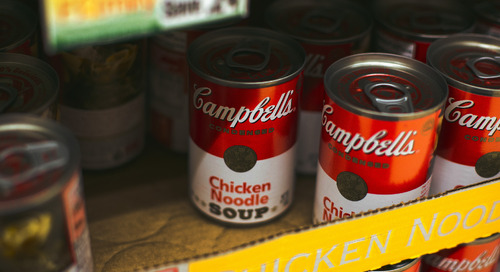 When the best souvenirs are from Wegman's

Or: What common pantry staples really say about a destination