Home » The Looptail, The Travel Blog Powered By G Adventures » The Freedom of Family Travel in Morocco
× Share this Article

The Freedom of Family Travel in Morocco

The thing I loved most about Essaouira, Morocco was watching my daughter play. It’s not that she had no other chance to play during our visit to the country; she’d already jumped from the ancient Roman walls in Volubillis and ridden a camel along the Atlantic Coast outside of Tangier. Yet in Essaouira she seemed the most free.

She loved playing with and watching the myriad of cats who darted between chairs looking for scraps, as we sat eating a fresh seafood lunch in an open-air restaurant within view of the mighty Atlantic Ocean. She hopped waves with her pants pulled up on a blustery day as our travel companion Julie attempted to learn how to surf. And she scoured through the sea glass and something we began calling sea pottery as we strolled the coast just below the towering fortress walls, stopping to enjoy our front row seat for a dazzling sunset.

I have no stats to share showing Essaouira to be more inherently safe than anywhere else in Morocco and we felt comfortable in other cities. Missing from the streets of Essaouira was the constant bustle of the souk in Marrakesh or the seemingly non-stop maze of walls in Fes. Essaouira felt far more laid-back than those other locations and a place to just run around and be goofy.

And goofy we were.

We have more pictures of everyone being hams for the camera from here than any place during our month in Africa. For younger kids, Essaouira is a playground. It has a long stretch of sandy beach perfect for sand castles and cartwheels and splashing in the waves. It has open, uncrowded public spaces along the waterfront and enough cats to entertain any age of kid. (When reviewing my daughter’s images from the trip, cats and seagulls were about all she took photos of in Essaouira.) For me it also held a family friendly atmosphere and it seemed we received the most readily available help here, finding directions or a meal in the town.

My daughter is a teenager now and while she remains an awesome kid, she still wants to act like a teenager. That’s one reason I am glad I took her to Africa when she was only eight years old, for the chance to play and be a kid in a foreign land and to start learning from an early age that travel and other cultures, while at first seemingly odd and different, can be a fun and rewarding experience. And if you’ve travelled with younger children, you know how important it is to give them time to just play and be themselves while on the road.

As I said before, I have no statistics on the crime rate of Essaouira relevant to other cities in Morocco. I do know this is a place where Jimi Hendrix and Bob Marley chose to hang out when they wanted to relax and escape. I also know it is a place I felt safe not keeping a constant eye on my daughter as we wandered the shops. And I do know it is the city where we received the most help with broad smiles.

G Adventures runs the Morocco Family Adventure through out the year. We’re thrilled at the prospect of showing you this enchanting country as you’ve never seen it — check out our small group trips to Morocco here. 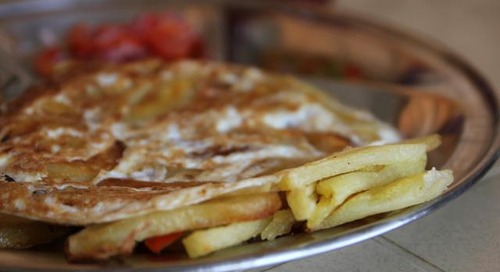 Five Foods You Must Try in Tanzania

How much do you know about the food culture of Tanzania? Find out what makes...

Instagrams of the Week: Sunsets