Home » The Looptail, The Travel Blog Powered By G Adventures » 10 cheap and cheerful places to eat in London
× Share this Article

10 cheap and cheerful places to eat in London

Londontown is a pricey one and it’s more that easy to be wooed into spending mounds of cash come mealtime. However, this needn’t be the case — especially since the city offers a glut of eateries that deliver on both flavour and price. Here are 10 places for the traveller on a budget to seek out, including the city’s oldest market, a famed Caribbean boîte and a Vogue-approved restaurant, with all dishes costing around a crisp tenner.

Charm overflows from the Borough Market, with cobblestones underfoot and a roof above protecting market-goers from the fickle skies. Within spitting distance from the London Bridge Underground, London’s oldest market — reaching back to 1851 — is home to everything from soft raw cow’s milk cheese from a local dairy to cheesy Balkan burek.

This is a great destination to nibble and roam, grabbing goods for tucking into later (perhaps some meat to go with all that cheese). Highlights include the hot sandwiches from the Hobbs Meat Roast, which has been around for over a quarter century. Queue-worthy baguettes come loaded with roast pork, stuffing and applesauce, making each bite a festive affair. Pubs nearby will please those keen for an after-meal pint.

In a town known for its food markets, Old Spitalfields demands to be explored. Found in the ever-trendier Shoreditch area, the covered market dates back to the 1800s. Having been glossed up in more recent years, it’s one of London’s shiniest homes to affordable eats. With dozens of street food vendors and restaurants proper, the old adage of something for everyone does stand up here.

For those keen to sit in a restaurant setting (and pay a bit more for a meal that fills) neighbouring Lahpet dishes out authentic and hard-to-find Burmese fare including a raved-about pickled tea leaf salad with fried beans and dried shrimp.

Still in Shoreditch, which has eateries tucked into every nook and cranny of the neighbourhood, this petite pizza chain has plenty to offer in terms of stretching that pound. Patrons sift into this brick-clad space where they turn out pizza by-the-slice or as whole pies. Standouts include a number boasting plenty of ‘shrooms, ricotta, pumpkin seed and chili, with a drizzle of garlic oil for some added oomph. The sharable pizzas cost £20 and fittingly measure a cool 20” in diameter. Drinks include beers and classic cocktails like margaritas, mojitos or martinis.

Over on the famed Brick Lane, loved by the literati and foodies alike, Beigel Bake is a classic spot for cheap ‘n’ cheerful Jewish fare. Open all hours of the day or night, this shop has been wooing diners since 1974, back when the area was full of Jewish immigrants. Since then the community has moved elsewhere, but this staple still turning out tasty grub that’s bookended by bagels.

Their rounds are boiled, yielding a chewy interior that stands up to an array of fillings. Fill yours with everything from salmon and a schmear of cream cheese to salt beef with a pickle and a squirt of American mustard. There will be lines, so for the queue-averse the spot next door will do just as nicely.

Sitting pretty on what was once a castaway plot of land, Pop Brixton is, yes, a pop-up initiative that is set to go steady until 2020. Collecting an assortment of indie businesses into shipping containers, this hub puts the focus on food and has won accolades for its stellar selection of grub.

Bites include everything from Vietnamese to Venezuelan fare. The latter sees the family-run Petare dishing out street food like the messy-but-worth-it masa fried chicken arepa; fried bird and corn loaded into a cornmeal bun laced with guava sauce and habanero mayo. It’s not a light dish, let’s just say that. At Alpes, raclette lovers see piles of gooey cheese scraped into demi-circles onto plates of potatoes and pickles while conjuring up Switzerland in the ole mind's eye.

Red Stripes and rum are served at the bar that joins all the businesses together, letting diners make more of a night of it should they be so inclined. There’s also a community garden (but of course), a barbershop and a boîte to restore your finest material treasures among the non-food market offerings.

It’s hard to resist the call of pasta, and this space turns it out for generally around £6.50, which is practically unheard of. Having made appearances on a number of Best lists, there is bound to be a line for the freshly-made pasta. A plate of the stuff may be as simple as gnocchi bathing in nutmeg butter or tagliarini swirled with hunks of Dorset crab and finished with lemon and chili. Wine on-tap makes the experience all the more delightful.

With space for up to 20 customers, this charming Wimbledon eatery is known for its flavourful Caribbean fare. Chef-owner Garfield Davis has scooped up many an award for his food, which skips from island to island — including Jamaica, Trinidad and Barbados — with the intent to educate people in the most delicious way possible.

Chef’s menu reaches from snacky bites like saltfish fritters to patties (jerk chicken! lamb!) over to more robust plates. In his pre-restaurant days, Davis appeared on a number of TV shows, including an episode of Ready Steady Cook, which he won with his mutton curry; a lamb version was produced for Sainsbury’s as a chilled meal. Here, the £9.50 dish pairs tender hunks of spiced mutton with rice ‘n’ peas and coleslaw.

Come warmer temperatures the likelihood of a hammock out front is high, and word has it that in-the-know patrons may be privy to some homemade hooch….

One would expect a buzzy space that’s gotten mentions in Vogue and been visited by fashion force Susie Lau to dish out eats that bypass the concept of affordable. However, chef Ravinder Bhogal serves a daily lunch plate at her Jikoni for a cool £12. Her cuisine plucks flavours from across the globe, exploring Asia, East Africa, the Middle East, with a sprinkling of the UK for good measure. Recently, specials have included roasted mackerel with a fennel and blood orange salad and a Turkish yoghurt soup with chili and mint butter. More than just delicious, £1 from each lunch helps provide free, healthful meals to those in need.

Heavy on the atmosphere, this midday eatery has been around since ’92 and is one of North London’s most beloved places to tuck into all day breakfast. The diner is awash in primary colours and boasts twinkly lights overhead, with its menu placing much focus on the egg and its permutations. They come scrambled with chorizo, partnered Mexican-style with spicy beans and cheese, and sit alongside ackee and spicy veg for a Jamaican take. Be sure to douse the latter platter — the priciest breakfast at £10.95 — in the house jerk sauce and grab a bottle to go. Additionally, look out for specials such as Ugandan matoke curry with homemade pickles.

Want to try some of London's best budget bites? Click here to learn more about our small group tours to the United Kingdom. 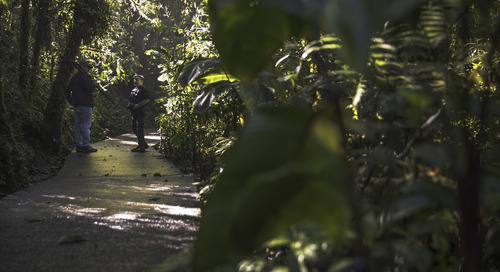 The ABCs of: Cloud forests 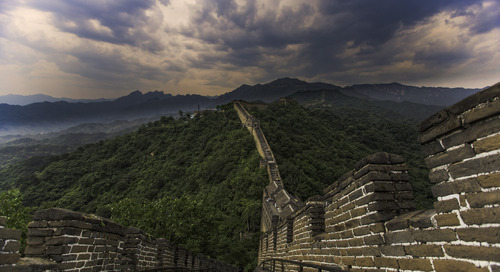 Everyone thinks they know this famous monument, but can you really see it from space?