Home » The Looptail, The Travel Blog Powered By G Adventures » 30 years since Gorillas in the Mist: A look at Dian Fossey's legacy
× Share this Article

Stare for too long at a silverback and you could be asking for trouble; misjudge their mood and your awestruck gaze might be mistaken for a challenge. But anyone lucky enough to lock eyes with mountain gorillas — even for a few seconds — will appreciate the powerful connection we share with these highly intelligent and emotional creatures that share 98% of our DNA.

It’s hard to imagine that 50 years ago, poachers were killing these primates out of anger, desperation and to fuel a market of grotesque curios such as ash trays made from severed gorilla hands. Only 880 mountain gorillas remain in the wild, but if it weren’t for the work of primatologist Dian Fossey, that number may be much lower.

Known by Rwandans as Nyiramachabelli ("the woman who lives alone on the mountain"), the passionate American researcher dedicated her life to studying and protecting gorillas. And although she was initially opposed to gorilla tourism, her work paved the way for one of the most successful community and conservation projects operating today.

Next year marks 30 years since Gorillas in the Mist — a film based on Dian’s own book — was released in cinemas. It which gave her story global prominence.

Ian Redmond, a conservationist and one of the world’s leading primatologists, worked with Dian right up until her brutal, unexplained death in 1985, and knew her both as a friend and a colleague. More than anyone, he understands the important legacy she left behind.

She changed the way we think about gorillas

Prior to Dian’s work, gorillas were terribly misunderstood, Ian explains: “They were best known to the public from 19th century accounts of their defensive behaviour when attacked by hunters — dramatic, screaming charges, and the ability to disembowel a human with one swipe. This led to their characterization as ‘monsters’ in many B movies, and, of course King Kong.”

She helped Rwandans understand the value of their wildlife

When Dian arrived at Volcanoes National Park, guards were underpaid and lacked training and equipment. Poaching was rife. She taught many of the staff in her remote camp how to read and write, and also assisted their families. “She made representations to government officials up to and including the President, and successfully argued against clear-cutting the forest in the early 1970s,” Ian says.

Her habituation techniques were used for gorilla tourism

Dian’s research methods centred on gaining the trust of her gorillas. She spent years mimicking their behaviour, even munching on wild celery exactly as they did. Two of her students, Bill Webber and Amy Vedder, used these same techniques to habituate troops for tourists to visit — although Dian initially seethed at outsiders as a disruption and nuisance.

“Dian didn’t think much of tourists!” Ian admits. “Although she eventually did publicly admit (at her lecture in London, in the Linnaean Society rooms on the publication of Gorillas in the Mist) that tourism as it was developed with the now-standard safeguards was having a beneficial effect on the conservation of the park. I think she’d be impressed by the growth in gorilla numbers, the annual Kwita Izina gorilla naming ceremony and the fact that her life’s work has been continued and expanded.”

She laid the foundations for further conservation projects

“The descendants of Dian’s study groups are still monitored,” says Ian. “New research is being done on various aspects of the ecology of the gorillas and their habitat — including how it is changing and how it might react to climate change. I was fortunate to have Dian as a mentor, though she was not an easy task-master, and was famous for having a short temper and a rich vocabulary! When I first joined her, Dian warned me of the isolation and physical hardships then told me: 'The gorillas are the gift, and one could never ask for more than their trust and confidence at the end of each working day.' ”

“Her story continues to inspire people to follow their dream and work for gorillas in particular and wildlife conservation in general.”

Our Rwanda & Uganda Gorilla Discovery tour visits the Karisoke Research Center, which was founded by Dr. Dian Fossey in 1967. Click here to learn more about the trip. 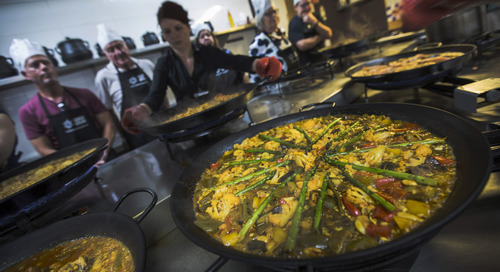 An appetizing look at one of the Mediterranean's most famous dishes

You know they can't fly. But do you know where they live?