Home » The Looptail, The Travel Blog Powered By G Adventures » A love letter to Grand Place, Brussels
× Share this Article

The first time I saw the Grand-Place, I was there for a party. Brussels Air, the newly renamed Sabena, Belgium’s national airline since 1923, was joining Star Alliance, a confederation of airlines, and airlines, as you may or may not know, love to throw parties in various far-flung parts of the world, partially because they’re a fun crowd, and partially because, when you work for an airline, getting places isn’t a problem.

I didn’t work for an airline, but I did occasionally write about them, so this time, they invited me along. It was my first time in Belgium, and like every time I go to a new country, I was all excited. But telling people I was going to Brussels elicited a weird, though fairly consistent response. “Brussels? Most boring city in Europe.”

Really? With the beer, and the chocolate, and the waffles, and the EU, and…

“Dullest place on the continent. No personality. Why are you going again? Well, I guess it is pretty close to Paris.”

The ride in from the airport was not encouraging. Bland, suburban sprawl, undistinguished commercial architecture, a lot of empty.

But the neighbourhood where I was staying, in the old town, was encouraging. Little streets unstraightened by the war, still named for their old market identities: Petite Rue des Bouchers, Rue du Marché au Charbon, and Rue au Beurre, which ultimately turned out to be my favourite.

I spent most of that first day sight-seeing, driving out to the Atomium, a vast stainless-steel facsimile of an atom, the last obvious remnant of the 1958 Brussels World’s Fair. I went to the Cinquantenaire, a beautiful city park built in 1880 to commemorate the 50th anniversary of Belgian independence from the Netherlands (which forced me to admit I had had no idea Belgium had ever been a part of the Netherlands, so I guess it does explain the Flemish). I wandered through the Royal Museum of Fine Arts, the Belgian Comic Strip Centre, and went out to the then-new Musée Hergé, devoted to the creator of Tintin, housed in Christian de Portzamparc’s elongated trapezoids that started to glow as twilight approached.

I went back to my hotel and changed into the closest thing I had to an appropriate outfit for a party made up mostly of airline CEOs, who tend to be fairly nattily turned out, and made my way by foot to the Grand Place (Grote Markt in Dutch).

I got there at just the right moment, the first dark of night falling just as I turned the corner from the Rue de la Tête d’Or, around what looked like one of Europe’s better Cathedrals but turned out to be City Hall, where the party was happening. The square, of which City Hall forms one side, dramatically underlit, the plaza glittering with damp cobblestones, was exquisite. Obviously unreconstructed, my fascination was interrupted briefly by the realization it is only as beautiful as it is because the Belgians surrendered to the Germans after just 18 days after being invaded, and so suffered little of the destruction their more stolid neighbours did. But, you know, ditto Paris, so whatever. Gorgeous.

The party was good, with its CEO-grade wine and canapés, but the highlight was when we were all called out onto the porticos and balconies to see a light show that had been arranged for the celebration. Looking back, it was probably a fairly run-of-the-mill corporate light show, but with the Grand Place as the canvas, it seemed at the time one of the most beautiful spectacles I’d ever seen.

Europe is, of course, quite rightly known for its squares. The Piazzas San Marco, del Popolo, and della Signoria, the Places de la Concorde and République, Trafalgar and Russell Squares. They’re all perfectly lovely with their cafés and pigeons, their towers and columns and spires. But the Grand Place is different. Though I knew immediately it had become my favourite square in Europe (and therefore probably the world), the reason didn’t come to me right away. I’ve been back two or three times now, every time, no matter what I’m actually there to do, I head straight to the square, and my favourite chocolate place, Galler, on the Rue au Beurre that heads off northwest from the square with its cat’s tongues in the summers and little waffles stuffed with chocolate in the winters. But every time, I stand in the middle of the square, or go back to the corner of the Rue de la Colline where I first caught sight of it, still the best place to take it all in at a glance. And that, I’ve discerned over the years, is probably a big part of what makes this square so good. It’s small, and you can take it in at a glance (it’s about half the size of Piazza San Marco, to give you an idea).

But more important: It also still very much operates as a working market square, not with quaint farmers markets and retro stalls, but with stores — you know, the way we buy and sell things today, not how we figure people did in 1743. The Grand Place, in short, is not a museum piece, not something for tourists to gaze at and imagine other people in other times. Belgium is a big part of how the world works now, and the Grand Place, for all its touristic charm — all the buildings surrounding it are gorgeous, not just City Hall – is an essential part of how its capital and its residents works now. You’ll find there aren’t a lot of business events held in the Piazza San Marco. But as this Star Alliance party wound up, and I wandered back up along the Rue de la Colline after tailing some CEOs for a while to see where they got to stay (Hotel Amigo, fwiw), I took a look back at the square, where I and thousands of other people a day don’t just gaze and wander, but go to work, do their shopping, meet their friends have their meetings. Museums are great but life, I’d argue, is maybe a bit better.

Want to see Grand Place for yourself? G Adventures can get you there. Check out our small group tours to Belgium here.

Protecting the planet through travel

Three sustainability initiatives you might encounter on the road with us 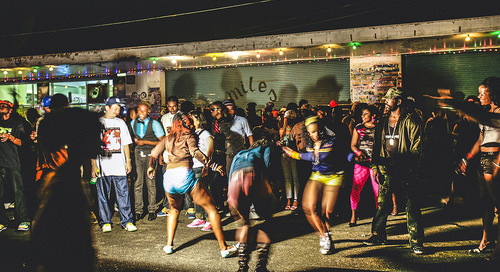 The Caribbean is so much more than sand and surf