Home » The Looptail, The Travel Blog Powered By G Adventures » Drink Portugal in with all five senses
× Share this Article

As one of the oldest countries in Europe, it stands to reason that Portugal is rife with enduring sensory experiences. Sweet, fortified red wine. Secret 18th-century tart recipes. Cool glazed tile covering every building surface. You can go from ancient city street strolls to tastings at world-renowned vineyards to hearty hikes around the Azores and Madeira Islands. Here we'll take you through just a few of our favourite experiences to be had in a country beloved for its Port wine, laid-back vibe and endless seafood.

Biblioteca Joanina and Livraria Lello: If books and the buildings that stack them are your thing, make your way to Coimbra and Porto. At the University of Coimbra in central Portugal, you can wander opulent Baroque salons purposefully built with preservation in mind. Teak doors, oak shelves, thick vault-like walls and, yes, even a colony of bats help keep the historic works safe from insects and humidity.

If you want to take a book home instead, head to Porto to see one of the oldest and most beautiful bookshops in the world. It’s rumoured that Livraria Lello inspired both the Grand Staircase and the Flourish and Blotts bookshop in the Harry Potter tales. The look is magical and J.K. Rowling lived and taught in Porto for a time, so we tend to believe it.

Golden cliffs and hidden grottos: If you like rock formations (and who doesn’t?) then the geologically-stunning Ponta da Piedade on the coast of Lagos is the place to be. Sculpted by erosion, these majestic cliffs reach 20 metres / 65 feet high in places. Around every corner is a hidden cove, rock arch or sea stack surrounded by azure water. Explore by foot, kayak, boat or SUP and then chill out on the iconic Praia do Camilo.

Ginjinha aka Ginja: Did you know you can pull up to a roadside stand for sour cherry liqueur served in an edible chocolate cup? It’s true! This cherished bit of tipple is made from ginja berries infused in aguardente alcohol for several months. When served you’ll be asked: com ou sem elas? The correct answer is com elas which means with a cherry in it. Just remember that it’s not a shot: sip slowly and enjoy it.

Pastéis de nata vs Pastéis de Belém: You can get Pastéis de nata all over Portugal but only the original is called Pastéis de Belém. One thing is true about both: you will want another. Like, forever. Invented in the 18th century by Jerónimos Monastery monks, these two-bite morsels exist thanks to an abundance of leftover yolk. Starching nuns' habits used a lot of egg whites which left plenty of yolk for baked goodies. The original recipe endures and is closely guarded by a few family members running Fábrica de Pastéis de Belém. The famous bakery just outside Lisbon churns out more than 20,000 tarts per day! We recommend that at least a couple make it into your mouth.

Sardines two ways: It’s a truth universally acknowledged that you either love or hate sardines. So it’s remarkable that the humble fish is both a favourite eaten fresh and canned in Portugal. Each June in the charming Alfama district of Lisbon, the air fills with the char-grilled aroma of sardinhas assadas from the many festival vendors. They’re seasoned with coarse sea salt, olive and vinegar then thrown on the open fire to crisp up. Can’t get enough? You’re in luck as a historic food shop called Conserveira de Lisboa is prepared to line your pockets with tinned fish packages for home. They’re beautifully designed and the wild-caught fish inside is very good.

Sweet hydrangeas and verdant greens: All you’ll want to do when you reach Sao Miguel, known as the green island of the Azores, is to breathe in deep. Giant blue, white and lilac hydrangea bushes line the roads and the rim of the iconic twin crater lakes in Sete Cidades. Hike to viewpoints around the photogenic blue and green lakes (one of seven Natural Wonders of Portugal) and treat your olfactory senses to endless fresh air. Want more? From the lost village of Sanguinho, you can happily sniff the foliage as you trek to the breathtaking Salto do Prego waterfall.

Fado music: Ready to have your heart wrenched? The Portuguese not only have a word for nostalgic longing (it’s saudade) but a musical style to go along with it. Fado, a genre that traces back to the 1820s at least, is the music of the bereft and deeply heartbroken. It was born in the ports to broadcast the mournful tales of sailors, bohemians, dock workers and the poor. Today you can hear fadistas sing their melancholic laments and take in a traditional Portuguese cozida (boiled dinner) in the Alfama district where the music originated.

Rattles, screeches and dings: For many travellers, getting a “lay of the land” early in your visit is essential. In Lisbon, there’s no better way to get the city’s layout than a tram ride. While the modern articulados offer a quieter ride, try hopping on a quaint yellow time machine known as an eléctrico to careen up, over and around historic streets. Listen for the screech of the brakes and the sounds of a vibrant city as you squeak through narrow lanes.

Your heart pumping from island hikes: When you think of islands famous for wine and sunshine, it's unlikely your first thought is to hike all over them. But that's exactly what we're suggesting for the Azores and Madeira. Trading your flip-flops for comfy hiking boots is the best way to escape the beach crowds and see a different side of Portugal. Volcanic calderas! Pristine waterfalls! Lava caves! You'll walk above the cloud lines, pass carpets of green and take in panoramic views of the surrounding seas.

Cool ceramic tile on every surface: If you close your eyes and think of Portugal, ceramic tile probably comes to mind. These gorgeous square gems are called azulejos and they have a long history in Portuguese culture. Originally created to ornament big blank walls, they also have a practical function — controlling the temperature indoors. Who doesn’t love the feel of cool tile on your forehead after a little too much sun and/or Port wine? Inside and out, these charming glazed backdrops are just waiting for you and your camera.

Ready to hop on an antique tram to track down mournful music, tasty tarts and smoky sardines? Maybe you'd rather put your boots to the lush green island landscapes of the Azores or Madeira? Here are a few tours that'll get you to a bunch of the experiences mentioned above:

Highlights of Portugal
Hiking the Azores
Hiking in Madeira 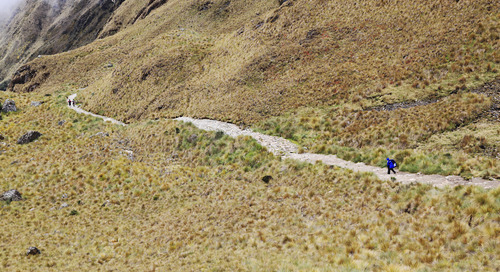 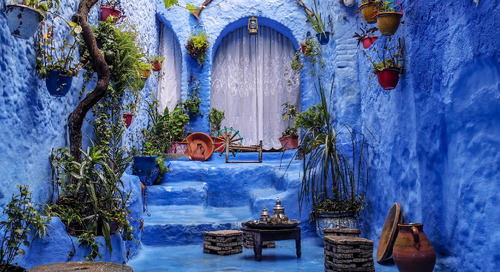 From mint tea to the blue walls of Chefchaouen, we share our favourite Moroccan things to see, taste, smell...