Home » The Looptail, The Travel Blog Powered By G Adventures » Khmer Chameleon: Blending with locals in Cambodia
× Share this Article

It’s become something of a mantra among travel experts, this call to “mix with the locals.” It urges us to learn the local language, to dress in local dress, to “do as the Romans do.”

It’s true that local interaction offers a more authentic experience, but how many of us truly engage beyond haggling at a market or talking to a taxi driver? With first-world pressures on our time, most travellers are lucky to even leave the tourist hotspots. With a little thought, however, it can be done. Here are six local experiences that offer a slice of real life in Cambodia.

Attend a class at a local school

The blackboard stands sentry at the front of the classroom. Eleven neat lines of white chalk spell out mathematical sums of increasing complexity. The teacher asks the class to add two unlike fractions. We visitors shrink back in our seats, desperately recalling our school-child arithmetic. Thankfully, we are rescued from embarrassment by a student who deftly provides the answer.

We use the beating sun to excuse our sluggishness. You see, the classroom isn’t a room at all, but a makeshift structure with a roof but no walls set up by the riverside on Koh Chen Island.

Unlike in formal school, the children don’t need uniforms to attend class. They wear football shirts and shorts, and carry battered notebooks in which they diligently write their notes and answers.

When class ends, I show two children how to spell their names in English. In return, they show me how to spell mine in Khmer, then proceed to laugh at my unsightly scrawl. It is a sweet and silly moment that far outstrips the joys of haggling at a market.

The Tuol Sleng Genocide Museum and the Killing Fields provide a wealth of information on the tragic Khmer Rouge reign, but it’s in meeting a survivor that the horrors truly come to the fore.

At Tuol Sleng, visitors can meet Chum Mey and Bou Meng, two of only seven survivors from S-21 prison where an estimated 17,000 people were imprisoned.

Of course, an entire generation of Cambodians were affected and it’s outside of Phnom Penh, away from Tuol Sleng, that we met a survivor with a more nuanced account of his experiences.

Oum Son Thom, an 82-year-old volunteer teacher on Koh Chen Island, told us about Pol Pot’s reign and explained that the reason you don’t often see old people in Cambodia is because so many of that generation were killed under the Khmer Rouge.

It was horrifying to contemplate the visible culling of an entire generation. The thought left us pensive and humbled as we thanked Oum Son Thom and bid farewell to the island.

Receive a blessing from a Buddhist monk

In most other countries, Wat Kampong Tralach Leu pagoda would be classed as remarkable. In this land of incredible temples, however, it is merely pretty.

I expected a cursory visit, but was immediately struck by the scene inside, not because of the elaborate shrine, but because of the Buddhist monk who sat serenely in the centre. The temperature inside was a few degrees cooler as if manually set to match the mood.

I was invited to receive a blessing from the monk. My instinct was to say “no, I’m not Buddhist and I’m barely spiritual,” but I was persuaded to partake.

I approached the monk, head dipped low, shuffling forward on my knees. I held out my arm, high and still so not to touch the monk. He tied a piece of red string around my wrist and bestowed on me his blessing. Outside, I was surprisingly emotional. Having been raised in a conservative culture, I was touched to be accepted into a holy place in this faraway land.

Our visits to a pottery workshop in Kampong Chhnang and a copper factory in Koh Chen were decidedly different to equivalent experiences in other countries.

There was no exhortation to buy a product, no extraordinary claim to unbeatable quality. Instead, our hosts offered a simple and unvarnished view of life in rural Cambodia.

One craftswoman in the copper factory told us that although this isn’t what she dreamed of, she accepted it as her station in life. Her quiet acceptance was in stark contrast to Western restlessness and the unrelenting pursuit of change.

Eat Krolan by the roadside

We stopped in Dom Dek, a small village 30km (18 mi) away from Siem Reap, for a local snack by the roadside.

Krolan is a mixture of sticky coconut rice and black-eyed beans stuffed into a bamboo flute and baked over hot coals for an hour or two.

The local vendor showed us how to unwrap the bamboo in order to reach the rice. She ran a demonstration of how the Krolan is cooked and told us that on a good day, she sells upwards of 60 flutes.

With a big smile, she told us that people from far and wide stop by her shack because she makes the best Krolan in the country. As I took a bite of the sweet and sticky rice, she nodded at me and smiled. In that moment, she knew I believed her.

G Adventures runs a number of departures in Cambodia. encompassing a wide range of departure dates and activities to cater to different tastes. We’re thrilled at the prospect of showing you this big blue planet of ours — check out our small group trips here. 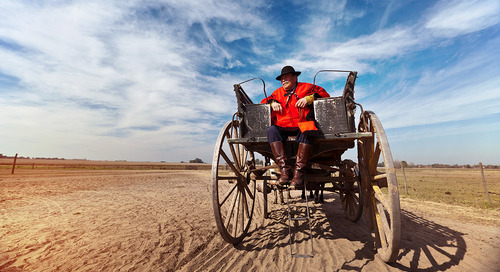 Packed with legend through literature and poetry, gauchos make up a large portion of Argentina’s identity. Water’s the theme as Todd Weselake takes on the Songkran festival and a slow boat up the Mekong River in th...