Home » The Looptail, The Travel Blog Powered By G Adventures » Must love travel: Three couples on how wandering the world brought them together
× Share this Article

Must love travel: Three couples on how wandering the world brought them together

It's no secret that romances often blossom abroad — particularly on G Adventures trips. To celebrate Valentine's Day — and love in general — we compiled three stories of couples who found, solidified or celebrated their love while travelling with us.

Q: How did you meet?

A: We met in on June 25, 1985. I had just turned 17 and Andy was 19. We both lived in Plymouth, England and actually only lived a kilometre away from each other, but just never moved in the same circles. At the time, I needed a bit of extra income, so I started to sell Avon. I rang Andy's doorbell and ended up staying and talking to him for two hours. I left him an Avon brochure which conveniently had my phone number on it, and a few days later, he called and asked me out. Andy seemed to be a good, honest guy who I deemed would grow on me, which he did quickly! We dated, and then lived together, and finally married (after seven years and many drunk proposals that I laughed at) on June 13, 1992.

Q: Did you always share a love of travel?

A: We have always been a high-energy couple. We have been to lots of Europe, lots of American states, Mexico, Cuba, Costa Rica — and, of course, Peru — together.

After we got married in 1992, we saved up money like crazy, and decided to rent out our house in the U.K. for a year and come over to Canada, where we had a place to stay in return for work. During that time, really got into the Canadian way of life (and the stupidly cold winters). After the year was up, we headed home to the U.K. and started up a business, but we had itchy feet — Canada was calling us back! We applied to move back (which takes a while!), and in the meantime had two children. The immigration papers came through, and we headed to Calgary on June 25, 1998 — 13 years, to the date, since the day we met. Holidays with the kids were always a little tougher, but we did get to Disneyland a couple times. Fast-forward a few years, and we were able to leave the kids at home and manage more vacations alone, including road trips with the motorhome and on our motorbikes, plus Las Vegas and a helicopter trip to the Grand Canyon, and a few nice hot beach holidays.

Q: Why did you choose G Adventures to celebrate your 25th wedding anniversary?

A: I have always looked at photos of Machu Picchu and thought it looked like somewhere I must visit one day — I didn’t really know where it was, but it was calling to me! So after a little research and some vacation brochures from G Adventures, I figured out we could do this amazing trip, and that June would be a great time to go — plus, it would coordinate with our 25th wedding anniversary. In this day and age, 25 years married is certainly something to be celebrated, so go big or go home we did! Figured out that we could do the National Geographic Iconic Peru tour and take in the Amazon, hike the Inca trail and Lake Titicaca all in one trip resonated with me. (And it was the upgraded tour!) Before long we had the time booked off work and secured Inca trail passes, starting the trail on June 13th (our anniversary) — perfect!

After the trip, we were sad to leave, it was a trip of a lifetime and we would do it again in a heartbeat! As we say “those that play together, stay together”. It’s worked well for us so far!

Met on the In Search of Iguassu tour.

Q: How did you two meet?

A: Both Stephen and I were living in London but had never crossed each other's paths — it took us quitting our jobs to go and travel the world to find each other! In 2011, I was on the In Search of Iguassu trip from Rio to Buenos Aires and Stephen was on the same trip, but travelling in the opposite direction. Our groups crossed paths on a tiny island off of Rio called Ilha Grande. The two groups spent a couple of nights enjoying the island together, and Stephen and I got to know each other. The rest is history as they say. After finishing our respective trips, we both moved to Sydney, fell in love, bought an apartment, got married and just finished another "quit our jobs and travel" trip for our 300-day honeymoon.

Q: Why is your love of travel important to your relationship?

A: We met whilst we were travelling in Brazil, we moved to Australia, we got engaged whilst on holiday in Vanuatu, got married in Mexico and took a honeymoon that covered 47 countries ... you could definitely say that travel is important to our relationship! Discovering new places, cultures, food and people together is twice as much fun when you're in a couple. Each of us brings a different perspective of travel to the relationship.

Q: How do you plan trips together?

A: We are both very organized people, but Stephen is the real planner — he has a spreadsheet for everything! That's what makes our trips so successful. It depends whether we're planning a short two-week break to relax away from work, or if we're planning a big, multi-month trip like our honeymoon. For our honeymoon, it took about two years to fully plan everything. We started off with a very, very long wishlist of places to visit. We ranked them individually and then averaged our rankings to get a combined list we were both happy with. We then cut the bottom places off, priced everything — and then cut out a whole lot more! That's one thing we've learned from our travels: there is a lot of compromise.

Got engaged in the Galapagos.

Q: How did you two meet?

A: We met at my brother's wedding in Ireland. As the only two single people at the wedding, friends and family thought it would be a good idea to set us up. We spent three months dating before Mick returned to Australia, for work. So we spent six months doing long distance.

Q: Did you always share a love of travel? Where are some of the places you’ve been together?

A: Yes, we love travelling. We have been to Thailand, Bali, Gili islands, New Zealand, Australia and now South America, Antarctica, Malaysia and Nepal for 5 months.

Q: You got engaged while travelling with G. Tell us that story!

A: We got engaged while snorkelling Los Tuneles, on the Galapagos islands. I picked out a substitute ring in Australia. Before entering the water I tied the ring to my board shorts. I asked a tour-mate to take pictures while I proposed. While Vicki was over a big sea turtle, I swam over and took her hand (while we were still underwater) and showed her the ring. I had champagne waiting on the boat, and we all celebrated together into the night.

From the Great Barrier Reef to the Amazon, the planet boasts no shortage of natural wonder 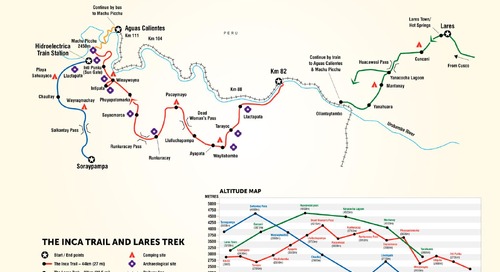 What is the Lares Trek? A primer to the "other" Machu Picchu hike