It wasn’t really a war. From the vantage point of nearly 20 years later, the skirmish looks like siblings arguing over who got the larger serving of dessert. But the fact it happened at all underscores how much we care about salmon here in the Pacific Northwest.

It started in Prince Rupert, British Columbia. In July 1997, an Alaska passenger ferry was penned in by Canadian fishing boats for four days. After the fleet allowed the ferry to depart, marine highway service to the Canadian port town was suspended for five months. The arguments went on for years. Washington and Oregon fishermen accused Canadian fishermen of harvesting too many salmon, while Canadians lobbed the accusation right back at their south-of-the-border neighbours. Eventually, a treaty was signed and the two neighbours (who have so much in common that there’s a movement to create Cascadia, an independent nation uniting British Columbia, Washington, and Oregon) settled down. Our respective passions for salmon haven’t faded; we’ve just learned to share.

Why are we so devoted to this silver-scaled beauty? It goes beyond the culinary, though there is no denying our affections are at their most fevered when the season opens. Then, Seattle’s fish markets are full of orangey-pink fillets and steaks or entire fish. A giant Chinook salmon can top 60kg (132 lbs.), the smaller Coho and Sockeye might weigh out at 15kg (33 lbs.), and we will eat it all. We can’t wait to get the stuff onto the grill. We don’t need it to be fancy; a light coat of oil to keep it from sticking, maybe a little sea salt and we’re good. A salad as a side, or asparagus. Simple. Perfect. And it all tastes of the inevitable arrival of summer to Seattle. The season is changing for the better when the salmon return.

The salmon story is the story of an epic journey. On the U.S. west coast, they hatch in the fresh water rivers of the Cascade Mountains, shaded by cedar and spruce trees. When they’re between two and four years old, they hear the call of the wild Pacific and they migrate west, some for hundreds of kilometres. They spend up to four years at sea; then, nature drives them to return to the river in which they were hatched to spawn the next generation.

Before it became synonymous with technology giants like Microsoft and Amazon, Seattle was a fishing and lumber town. The neighbourhood of Ballard was populated by Scandinavian fisherman who established boatyards and shingle mills there. Then, in 1912, Ballard became the site of a project that was way ahead of its time. Hiram Chittenden — the Seattle district engineer for the Army Corps of Engineers — understood that if the salmon could not return to their spawning grounds, they would die out. So he included a fish ladder when engineering the Ballard Locks. The Locks serve two purposes: they allow fishing vessels to return to Seattle’s sheltered lakes, and they allow the salmon to make their way back upstream, to spawn.

This “fish ladder” isn’t really a ladder; it’s more an elongated staircase, which features a series of pools with an entry on one side and a slightly raised exit on the other. The salmon leap up each step, battling the downhill current. I find it impossible not to cheer for them, even though they are rushing toward their own end. They are the textbook definition of driven, beating themselves against the obstacles — rocks and fallen trees, and manmade diversions — to reach their destination. At the locks, there’s a window into a landing on that staircase. You can look through the thick glass at the fish pausing before tackling the next series of steps. I take visitors there year-round for the exhibits that explain the salmon migration, but it’s best to visit in late summer, when the salmon population is at its highest.

About 35km (22 mi) from Seattle, there’s another fish ladder. A bridge spans Issaquah Creek and, late in the season, the waters are full of battered two-finned fighters. Their skin has turned red with age, their bellies and sides are scraped from miles and miles of hurling themselves against rocks and tree roots and whatever is between them and their original spawning grounds. They are exhausted. And they are nearly home.

The Coast Salish peoples of the Pacific Northwest have long understood the significance of the salmon. A Yakima legend tells how the people suffered when they did not care for the fish, while a Squamish legend tells of how different types of salmon came to the people. And there is the Haida legend of how a salmon boy learns to respect his salmon neighbour. Indigenous people in this region knew the salmon were a gift; managed fishing and good stewardship of the land would ensure their annual return. There are gorgeous examples of salmon-inspired Coast Salish art at the Seattle Art Museum, and modern Indigenous artists still turn to the salmon for inspiration.

The role salmon play in our local economy has been eclipsed by technology giants. But they remain a critical part of what makes Seattle … Seattle: Local restaurants adapt their menus to accommodate the salmon in season, there’s a welcoming committee for the return of the salmon every year in a tiny park above the Fauntleroy ferry dock in West Seattle, and, in Issaquah, there’s Salmon Days, a huge festival with music and art that celebrates the return of the salmon. If you’re lucky enough to catch the summer powwow at Discovery Park in Magnolia, there will be salmon on the menu, and salmon represented in the art sold at the craft booths.

I always have this amazing creature with me: I wear a salmon-shaped gold ring. I bought it not long after I moved to Seattle and embraced the nature of the salmon, both mythical and practical. For a traveller, the salmon makes a compelling mascot. He reminds me that travel is a great adventure, and also, that there is just as great an adventure to be found in returning home.

Want to see the Ballard Locks for yourself? G Adventures can get you there. Check out our small group tours to the U.S. Pacific Northwest here. 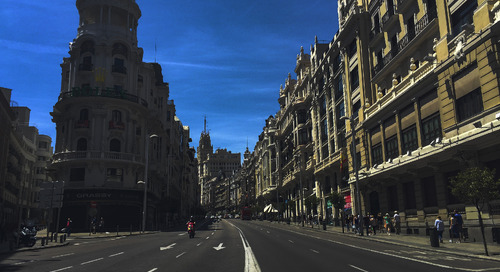 From paste-ups to plants on walls, the Spanish capital is a hotspot for outdoor art 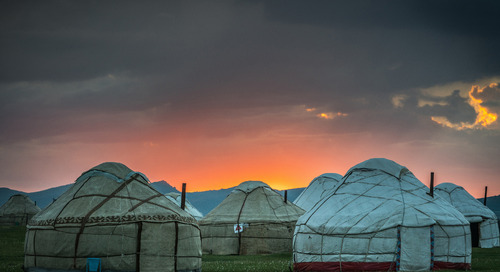