Home » The Looptail, The Travel Blog Powered By G Adventures » The art of trekking: Colombia’s Lost City
× Share this Article

“Think of it like the Machu Picchu of Colombia.”

During the weeks leading up to my first trip to South America in 2014, that was how I often explained the significance of La Ciudad Perdida to friends and family — and indeed, there are many parallels between the two ancient sites.

Known as the Lost City in English, La Ciudad Perdida is a pre-Colombian archeological wonder, believed to have been built in 800 A.D. — or some 650 years earlier than Machu Picchu. It is sacred to four indigenous groups in the Sierra Nevada mountains of northeast Colombia — including the Wiwa and Kogi tribes — just as Machu Picchu lay at the heart of the Inca civilization. And just like Machu Picchu, La Ciudad Perdida also wasn’t discovered by the outside world until the 20th century; in its case, by looters in 1975.

But there’s one key difference to note — while journeying to Machu Picchu on such routes as the Inca Trail and the Salkantay Trek is optional for travellers, La Ciudad Perdida must be reached on foot: via a five-day trek through steep, muddy tracks and humid jungle heat.

Creating the following hand-drawn map of La Ciudad Perdida was a welcome chance for me to re-live some of my own favourite moments from trekking to the site — following in the hoof prints of horses, who ferried supplies up and down paths no longer accessible by car; bonding with fellow travellers and our Wiwa guides Juan and Manuel, so much so that at times, our journey felt more like a pilgrimage; and finally climbing the stairways and stone terraces of the Lost City, in the early morning hours of our fourth day.

And yet, the moments that had the greatest impact on me were also the simplest — here’s how I described them afterwards in my journal, on my first night back in Santa Marta:

“I’m not sure I’ll understand the lessons of this week for a while to come. I don’t know what it means to have received such a momentary glimpse into the lives of the Wiwa and the Kogi. I only know the images of smoke seeping through the thatched roofs of their homes, of the women’s colourful beaded necklaces, and of the donkeys and horses and cows and chickens and fruit trees that fill their yards; and I know that these images will not leave me for the rest of my life.”

For me, that is the true reward of trekking to La Ciudad Perdida, and of all trips that take place at the intersection of physical and cultural adventures — they are the journeys that stretch our legs as much as our understanding of the world.

See the Lost City with G Adventures. We’re thrilled at the prospect of showing you this big blue planet of ours — check out our small group trips here. 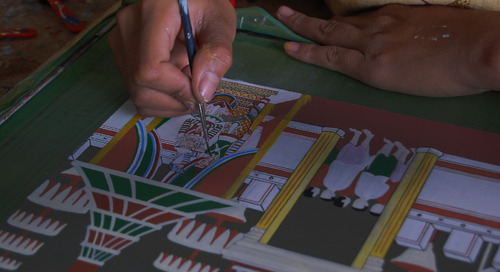 The art scene in Cambodia: More than a cultural revival

With a troubled history to draw from, a cultural tradition to restore, and a future to shape, Cambodia’s ba...