Home » The Looptail, The Travel Blog Powered By G Adventures » The best things to do on a daytrip to Alexandria
× Share this Article

The best things to do on a daytrip to Alexandria

Founded by Alexander the Great in 331 BC, hence its name, Alexandria, on Egypt’s Mediterranean coast, stood as one of the greatest cities of the ancient world — second only to Rome — for several centuries. The city was home to several treasures of the ancient world, including the almost mythical Library of Alexandria, considered a global storehouse of ancient scripts and knowledge, and the Pharos (Lighthouse of Alexandria), one of the official Seven Wonders of the Ancient World. Together, their history attests to Alexandria’s importance and to the role it played in ancient, Hellenistic Civilization.

Both of these wonders are gone, having succumbed over the millennia to fires, earthquakes, wars and reconstruction. The same fate applies to much of Alexandria’s ancient city and monuments, many of which are no longer visible today. Despite this, their history, stories and lessons remain.

And while you can still enjoy the surviving ancient sights, we recommend balancing your approach. Walk the city streets, explore its markets and stroll its seaside promenade. Therein you’ll find the city’s laid back and welcoming feel. And you’ll find how Alexandria really shines: in living history.

Alexandria is only two hours from Cairo, making it an ideal day trip away from the bustle of the capital city. Even better, spend a night there to experience evening life along the Mediterranean.

Regardless of how you do it, visit Alexandria. And when you do, here are five ways to make the most of your visit.

The ancient Royal Library of Alexandria is without parallel. It was estimated there were between 40,000 and 400,000 scrolls housed there for research and education until it was burned down sometime between the 1st century BC and 3rd century AD (historians still don’t really know). However, the modern Bibliotheca Alexandria, built in 2002, continues in the ancient library’s spirit of learning and education.

Although the Bibliotheca Alexandrina hosts an impressive collection and reading room — home to eight million books and the potential to host 2,500 readers —- the complex constitutes so much more than just a library. It also includes four museums, four art galleries, a planetarium and a laboratory specializing in the rescue and preservation of ancient manuscripts.

2. The Corniche and Citadel of Qaitbay

To enjoy Alexandria’s prime position on the Mediterranean Sea while also meeting and engaging with local people and families, take a walk along the Corniche, a waterfront promenade which stretches for ten miles between Montana Plaza and the Citadel of Qaitbay.

If the entire distance sounds daunting, we suggest narrowing your sights on the segment just near the Citadel of Qaitbay. Stretch your legs, take in the sea air, and enjoy photographing the feral cats climbing the rocks and sea wall. Take a cue from the locals: choose a spot to sit down, enjoy the view and serenity, and do some people-watching.

If you have time, visit the Citadel and enjoy even more views of the sea from the top. Although much of the building has been rebuilt over the centuries, some sections of it date back to 1480. Additionally, it stands on the foundations of the famous Pharos Lighthouse, one of the Ancient Wonders of the World, until it was levelled by an earthquake in the 14th century.

No matter where you look deep in the ground in Alexandria, you’re likely find something connected to its ancient past. To the point, when a donkey fell into a hole in the ground 1900, its owner ended up finding much more than his missing steed. He found a massive Roman catacomb, or burial site.

These catacombs, built in the Graeco-Roman style, are believed to have been constructed in the 2ndd century A.D., and are the largest known. (In this part of the world, it’s crucial to highlight that there may still be other Roman burial sites in Egypt yet undiscovered.) Used as a burial chamber for approximately two hundred years, the catacombs consist of three layers of tombs and burial chambers carved into the bedrock to a depth of 35 meters.

Today, visitors can descend into the catacombs via a spiral staircase originally used to transport deceased bodies. While the bottom level is flooded and inaccessible, it’s possible to explore the other layer-chambers by making your way through the tunnels and admiring the intricately-carved burial spaces that together reflect Alexandria’s trademark intersection of Greek, Roman and Egyptian cultures.

Note: You can easily walk to the catacombs from Pompey's Pillar (see below).

Another surviving element of Alexandria’s importance in the Roman Empire is Pompey’s Pillar. Built in 297 AD to celebrate the victory of Roman Emperor Diocletian over an Alexandrian revolt, it is the largest triumphal column constructed outside of Rome and Constantinople. Standing at 26 meters (85 feet) tall and made from a single piece of Aswan granite, it’s an impressive structure that has survived the elements and the ages.

The pillar is located at Serapeum Temple, so you’ll also have the opportunity to explore these ruins and tombs, though little detail of those remain. Most importantly, this location offers the opportunity to see elements of Alexandria’s modern and ancient city side by side.

Wandering through the Souq District of Alexandria, the market streets at the western end of Midan Tahrir, stands as one of the highlights of our visit. Although we are fans of markets almost everywhere we travel, the Souq District to us possessed a special atmosphere. We enjoyed the everyday bustle of the streets here, particularly because they were so layered with hospitality and kindness.

Streets are flush with carts piled high with fresh vegetables and fruits, while vendors banter back and forth between each other and with buyers as to the lowest price that day. Here, it’s one-part business, another part sport – all of which informs an air of playfulness and joviality.

Food stalls and cafes line the streets. They serve up bowls of foul, a local Egyptian bean specialty, sweet, strong tea, and fresh rounds of local bread. Explore further and you’ll find even more humanity and commerce, people selling clothes and housewares. The colors, textures and aroma of the food streets, however, drew us back to their fold as the most engaging.

Want to see Alexandria for yourself? G Adventures can get you there. Check out our small group tours to Egypt here. 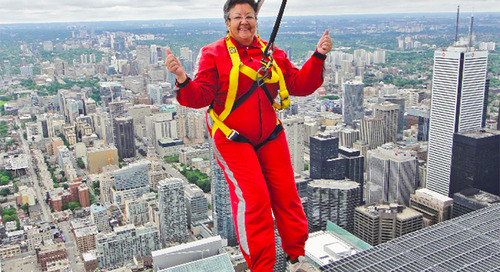 How Far Will You Go? Ten travellers who hit great heights

From rappelling to skydiving to sailing over amazing landscapes 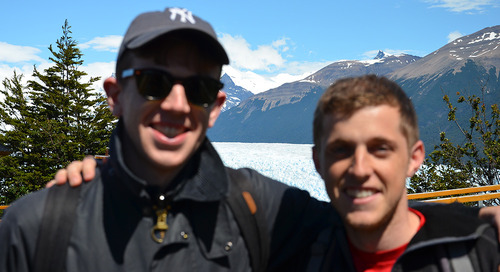 A tale of friendly, familial competition on the trail