Home » The Looptail, The Travel Blog Powered By G Adventures » Why Oslo is a design-lover's dream destination
× Share this Article

Oslo is a design lover’s dream; it has iconic museums, stately buildings and the streets are filled with chic cafes and sleek restaurants, all filled with a minimal Nordic vibe. That’s not all, however. Oslo is hands down the most international city up north in the Nordics. Once a quiet dock city, it saw a boom since their national opera house was built in 2008. Today, the city’s shoreside has a growing hub of skyscrapers part of the Barcode Project, which kicked off in 2016. The neighboring Fjordbyen waterside project has a series of new apartment buildings going up alongside a new world-renowned museum showing international art.

This year marks a new beginning for the city, as it has eliminated 700 parking spots in the downtown core to make it more pedestrian and bike friendly. That means more businesses will be popping up in the downtown core, so stay tuned. Strolling through Oslo (yes, even in winter) is the best way to soak up the city’s flair, as the city’s architecture is everything you’ve never seen. From glass-encased restaurants to concrete nightclubs and Victorian-styled hotels, this city is a collage from the past. Here is a must-do list of where to go, from museums to shopping districts, public sculptures, to icons of Nordic minimalism that seem to match the chilly, wintery weather in this Scandinavian city.

The city’s most striking architectural masterpiece is, hands down, the Norwegian National Opera & Ballet. This iceberg-reminiscent building, made of white marble, opened in 2008 with a stunning design by Snøhetta architects, who turned a bland corner of the Oslo Fjord into a welcoming public space on the water. Steps away from the opera, Aker Brygge is part a bourgeoning art complex as part of the Fjordbyen urban renewal project. The stunning Renzo Piano-designed Astrup Fearnley Museum sits on the Tjuvholmen Island, and is accessible by bridge. It’s worth the visit to see the stunning sea view and see artworks by Gilbert & George and Damien Hirst; a retrospective of Jeff Koons is on view until January 20.

Since 1901, Nobel Peace Prizes have been awarded in Oslo. The Nobel Peace Center is a museum that tells stories about the lives of Nobel Peace Prize laureates, the current exhibit Rune Eraker's photos from the civil war in Colombia, runs until April 1. But if you’re looking for classic, old school Norway, visit the royal estate. While the Norwegian royal family is on holiday, take a trip to the Royal Palace of Norway, which is open to the public in summer months. The stunning Nordic-designed staterooms, many of which are adorned with Neptunian tridents, are lit up at night, showing its marvelous front gates and architecture.

For something more local, uncover the indie flair in Grünerløkka, the bohemian east side of Oslo, known for its art galleries, independent boutiques and bar scene. For starters, check out TM51, an art gallery showcasing cutting-edge local artists, and a short walk will take you to independent spaces like Gallery 69 and Kunstplass 5. But the main exhibition of the year is the forthcoming Oslo Architecture Triennale, which kicks off this September.

Design lovers can’t deny the classy restaurants that line this oil-rich country. For upscale fine dining with a Norwegian twist, try Statholdergaarden, a 17th century baroque palace converted restaurant, which has a seasonal winter menu with deer. But for Norwegian delicacies, head to the Vulkan district for the upscale food market, Mathallen Oslo, which has specialty coffee, organic meats and freshly baked bread. They even have a wine club, a culinary academy and events (check their online calendar).

For a taste of Norwegian beer, it’s worth trying the Schouskjelleren Microbrewery, a 19th century brewery which serves six homemade brews served at their neighboring brewpub (try the Oslo Special Bitter). For cocktails, Himkok is a cocktail bar with a discreet entrance, making it feel like a secret club (try their Beta cocktail, which combines vodka with carrot juice and ginseng). For a stunning view overlooking the city, the Summit Bar is perched at the top of a hotel in the downtown core.

They say licorice is an essential Nordic specialty, but not everyone loves its salty taste. For irresistible sweets, though, Cocoa is the city’s first “cocoa bar” tucked beside the leafy Birkelunden park, which is worth a walk through the wilderness. At Cocoa, try a traditional hot chocolate, a chocolate beer (yes) or chocolate cake with chili, honey and lemon peel.

If you’re staying in the heart of Oslo, you simply cannot miss one street called Egertorget. It’s home to Eger Karl Johan, a high-end department store featuring 125 brands including Stella McCartney and Marc Jacobs—as well as local designers, many of who work with ethically-sourced materials. For an even more local feel, pop by the F5 concept shop, which features independent brands and accessories from Moe Oslo, SWY Studio and Annie Berner. The quirky menswear boutique Dapper sells everything from city bikes to wool sweaters. Don’t forget to ask the staff about biking to South Africa – as experts, they can offer their own fine-tuned travel tips. 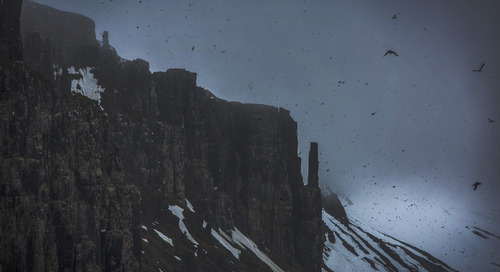 One thing's the same: it's all pretty darn cold

Spooky stories and terrific tall tales about some beautiful beaches