Home » The Looptail, The Travel Blog Powered By G Adventures » 6 Things You Might Not Know About the Galápagos Islands
× Share this Article

6 Things You Might Not Know About the Galápagos Islands

It’s no secret that the Galápagos Islands are the place to go to experience unparalleled wildlife viewing, but there’s more to meet the eye in this seemingly isolated archipelago than Blue-footed boobies, as adorably awkward as they are. Read on for some lesser-known bits of trivia guaranteed to impress even the savviest of travellers. Here we go!

1. They are one of the first UNESCO World Heritage sites

2. They are home to the world’s northernmost penguins

There are 17 species of penguin in the world and all of them live in the southern hemisphere.

All except the Galápagos penguin, which as you would suspect, lives in the Galápagos Islands. The Galápagos, however, actually straddle the equator. While most of the land mass is south of the equator, a small part of the island of Isabela, and a few other islands, technically lies in the Northern Hemisphere. This means that there are a tiny number of penguins that technically make it to the Northern Hemisphere, making them the northernmost penguins in the world. They barely get more than one degree north of the equator, but they are nonetheless in the “north.”

3. They were the inspiration for Charles Darwin’s other theory

It’s likely you’ve heard about a little thing called the Theory of Evolution by Natural Selection, which Charles Darwin developed during his time in the Galápagos Islands.

However, you may not be aware that the Galápagos was where he got the inspiration for his other groundbreaking theory, The Structure and Distribution of Coral Reefs, which postulated how atolls are formed. It reshaped how people thought about the world.

Darwin wasn’t just a biologist, he was also one of the top geologists of the age, and investigating coral atolls was one of the primary objectives of the journey. How coral — which grows in shallow water — existed in the deep ocean was one of the great geologic questions of the 19th century.

The theory holds that coral atolls are the result of volcanic mountains that have sunk. During the process of sinking, coral grows in the shallow water around the island and over time, the volcano is totally submerged but the coral ring remains. You can see evidence of this all over the Pacific, especially in island chains like Hawaii. The youngest islands are the largest (such as the Big Island) and as you keep going out, the islands get older and smaller, until they eventually become coral atolls.

4. They never had a native human population

The first known case of humans setting foot on the Galápagos occurred in 1535, when Bishop Fray Tomás de Berlanga from Panama accidentally landed there en route to Peru. Despite its 16th century discovery, there were no permanent human settlers for hundreds of years. It was primarily used as a base for sailors in need of fresh food and water.

The first semi-permanent resident was Irishman Patrick Watkins who was marooned on Floreana Island from 1807–1809. The first true residents didn’t arrive until Ecuador took control of the archipelago in 1832. Today the islands have a permanent population of more than 25,000 residents.

This historical lack of people is the reason why most of the animals on the islands have no fear of humans.

5. They saw no air traffic until the Second World War

Prior to the Second WorId War, there was no runway on the islands for airplanes to land. During the war, the United States established an air base on the island of Baltra to help defend the Panama Canal from the Japanese. At the end of the war, the fortifications built by the Americans were given to the Ecuadorian government, and the airstrip became the basis for what is today the airport. Most of the 200,000 annual visitors to the Galápagos arrive on the runway that was originally created by the US military.

6. Master and Commander was the first feature film to be shot there

The 2003 film Master and Commander: The Far Side of the World was partially shot on location and was the first feature film that had permission to shoot in the Galápagos. While the production company worked with the national park, they were not granted exemptions to the park rules. They had to remain on trails and carry their gear by hand.

Other than documentaries, there have been no movies filmed in the Galápagos since.

G Adventures runs a number of departures in the Galápagos Islands encompassing a wide range of departure dates and activities to cater for different tastes. We’re thrilled at the prospect of showing you this big blue planet of ours — check out our small group trips here. 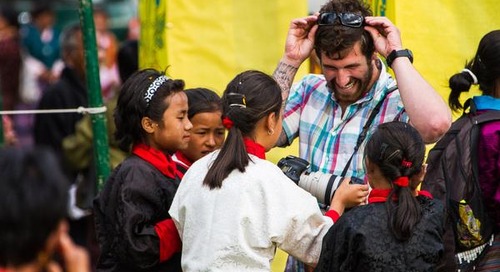 Snapping on the Street: 8 tips for travel photo etiquette 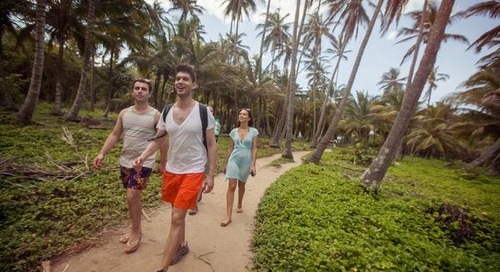 10 Things You Should Do Everytime You Travel

Travel blogger Jaharn Giles urges you to make the next step count and a chance to win your next adventure. ...