Home » The Looptail, The Travel Blog Powered By G Adventures » City Slicker: Highlights from Eastern Canada and the US
× Share this Article

City Slicker: Highlights from Eastern Canada and the US

If you look at the United States and Canada as one unit you will probably come to the conclusion that there’s a lot of cool stuff out west. From national parks, to mega fauna (bison, sea lions, moose, antelope), not to mention such memorable cities as Las Vegas, Vancouver and San Francisco.

But don’t ignore the east. It has so much to offer the traveller, too! The east is where most of the population lives, has a rich history, and is where most of the economic activity is located. Moreover, it is far easier to get around in the east; driving times are dramatically less and you can visit much more in a shorter period of time.

Here are some of the highlights and lesser-known attractions you can visit on your travels through the major cities of the eastern side of the US and Canada.

Locals call it the “capital of the world,” although I’m sure people in London, Paris and other cities might disagree. The more obvious tourist attractions can be visited in one day: Times Square, the Statue of Liberty and the Empire State building. New York City has a lot of history, however, and there are many things to see that the first time visitor might overlook.

Federal Hall. Located across the street from the New York Stock Exchange, Federal Hall harkens back to the time when New York was the capital of the United States. This is where George Washington took his oath to become the first President of the United States, and where the first Congress sat in session. While you are there, visit the Trinity Church and take a tour of the New York Stock Exchange.

Metropolitan Museum of Art. In my opinion, the Met is the best museum in the world. What sets it apart from the great museums of Europe is the diversity of the collection. Because the US was created later than Europe, the period of time that the Met covers is much greater. It is easy to spend a full day there.

The great thing about a trip to Washington, D.C., is that most of the attractions you might want to visit are within walking distance of the National Mall. Here, you will find all the Smithsonian Museums (including the amazing Air & Space Museum), the National Portrait Gallery, the various presidential monuments (Lincoln, Jefferson, Washington) as well as the White House and the Capitol Building.

However, if you take the time to get away from the Mall, you can also experience some pretty great places.

Ford’s Theater. This is the place where Abraham Lincoln was shot and where I witnessed one of the best examples of storytelling by a park ranger. The ranger just sat on the stage with nothing more than a chair and told the story of the assassination of Lincoln. It was simple and impactful. The Petersen House (the house where Lincoln died) is across the street and is also run by the National Park Service.

Arlington National Cemetery. You can walk here from the Lincoln Memorial, although technically it is in Virginia, not Washington. Formerly the estate of Robert E. Lee, it was converted to a cemetery after the Civil War. Here you’ll find the remains of many famous Americans, including John F. Kennedy, Joe Louis and the Tomb of the Unknown Soldier. Make sure to dress and act appropriately when you visit.

Niagara Falls is one of the largest waterfalls in the world and certainly one of the best known. Take a break from those cityscapes and take in this inspiring landscape.

"Cheesy" Tourist Attractions. If you like cheesy tourist attractions, you will love Niagara Falls. It has a Ripley’s Believe It Or Not Museum, as well as a Guinness World Record Museum. Toss in some wax museums and you are in heaven.

Toronto is the largest city in Canada, the third largest city north of Mexico and the capital of Ontario. It is also the economic and cultural hub for Canada. As you will find in any city its size, there is plenty to do. Here are some of the main attractions you’ll find in Toronto.

NHL Hall of Fame. When you think of Canada, it’s likely you’ll also think of hockey. It is the only country that features the game on its currency. In Toronto you can explore the history of the game and learn about some of its greatest players. While there, you can even stop at Wayne Gretzky’s restaurant!

CN Tower. Formerly the world’s tallest freestanding structure (surpassed by the Burj Khalifa in Dubai) it offers the best views of the city and Lake Ontario. For those who are not faint of heart, you can do a skywalk on the edge of the tower and walk over a glass floor that looks 342m (1,122 ft) straight down.

Dining. Toronto is one of the most diverse cities in the world. Here you can sample great food from Asia, South America and beyond. Don’t forget to stop by a poutinerie so you can compare it to the poutine in Montreal!

Ottawa is Canada’s capital city, yet it is often overlooked by larger Canadian cities like Toronto, Montreal and Vancouver. However, as with any capital city, there are a plethora of things to do and see in the Ottawa area.

Rideau Canal. One of Canada’s UNESCO World Heritage Sites, the Rideau Canal connects Ottawa to Lake Ontario. The starting point of the canal is located next to the Chateau Laurier hotel and is only minutes from Parliament Hill. In the winter, the canal freezes over and it becomes one of the world’s largest skating rinks.

Parliament Hill. The seat of Canadian government, the Parliament building is a masterpiece of Gothic Revival architecture and hosts more than 3 million visitors per year. You can get a tour of the building and see where the Canadian Parliament and Senate sit in session.

Museums. Ottawa has several great museums as is befitting a capital city. The Canadian Museum of Nature, The Canadian Museum of History and the Canadian War Museum are some of the best in the area. There are actually many more museums in the Ottawa area — including The Diefenbunker, a Cold War museum — that cover everything from art to aviation.

Quebec’s largest city — and the second largest city in Canada — Montreal’s culture is unlike anything else you will experience on your eastern road trip.

Mount Royal. If you don’t speak French, you might not realize that Montreal literally means “Mount Royal,” which is a hill in the city. A visit Mount Royal Park will afford you the best views of the city.

Food. Montreal is a fantastic city for food. Its bagels are on a par with New York City. Its smoked meats are to die for (visit Schwartz’s Deli for some of the best). And while poutine was invented in Warwick, Quebec, which is a town located north east of Montreal, you can certainly find one of Canada’s national dishes in restaurants all over the city.

Old Montreal. As the name would imply, Old Montreal is the oldest part of the city and was where the original French settlement was located. Attractions worth seeing include Montreal City Hall, Notre Dame Basilica and the Old Port.

Back in the United States and now to the birthplace of American independence. If you are a history buff, Boston is the top city in the US. In addition to its history, it is also home to some of the greatest universities in the world.

Harvard Yard. A 22-acre grassy parkland, Harvard Yard is in fact the oldest part of its namesake’s campus. If you’d like to learn more about this famous university you can catch one of the walking tours run by current students, which depart from Harvard train station.

Freedom Trail. The freedom trail offers a 4km (2.5 mi) walking tour of some of the most important places in the history of Boston. During the walk you will see the Boston Commons, Bunker Hill, the USS Constitution and Paul Revere’s House.

Black Heritage Trail. Massachusetts was the first state to declare slavery illegal in 1783. As such, it became a focal point of the anti-slavery movement in the United States. The Black Heritage Trail takes you past 15 pre-Civil War sites that played important roles in the struggle for civil rights and the end to slavery.

G Adventures runs a number of departures in North America encompassing a wide range of departure dates and activities to cater to different tastes. We’re thrilled at the prospect of showing you this big blue planet of ours — check out our small group trips here. 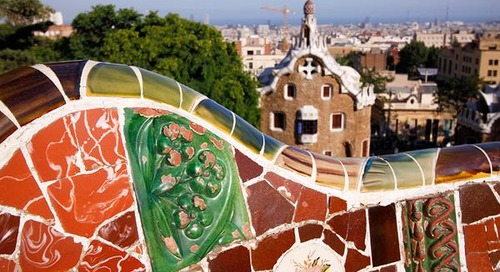 Barcelona: Get Lost in Gaudí

Travel writer Genevieve Hathaway takes a spin around Barcelona with Gaudí as her guide. 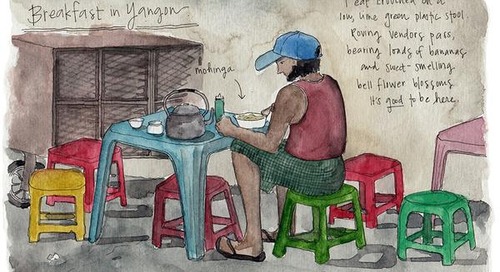 First Impressions: Burma Through the Eye of an Artist