Home » The Looptail, The Travel Blog Powered By G Adventures » Ethiopia: The past, present, and future of coffee
× Share this Article

I think a lot about their hands. The hands of farmers I met in the country where coffee was born. Hands, brown like mine and browner still, coaxing saplings from rich soil, pulling bright red berries (called “cherries”) off thin branches, transforming fruit into the precious liquid that propels me and millions of others into the day.

I arrived in Ethiopia in the middle of the night. The air was thin and cool; the city, hazy and quiet, giving no indication that it was the origin of the substance that caffeinates the world. Coffee is our collective drug of choice: We drink more than 2.25 billion cups of coffee globally, with Canadians among the world’s top consumers. Yet, despite this affinity for the beverage, most think of Starbucks as the source of coffee, not a distant country nestled in the Horn of Africa.

Ethiopia, however, represents the past, present, and future of coffee. It is not only where the Coffea arabica plant first blossomed, but also the place that gave the world methods of coffee preparation, along with a culture of community around the beverage. And of all the coffee-growing regions, Ethiopia holds the greatest diversity of coffee plants — what is needed to sustain the crop well into the future.

The country is many things at once. Ethiopia is home to the ancient remains of modern humans and one of the oldest alphabets still in use. The landlocked country has its own time that begins at sunrise, and a calendar of 13 months. And it has never been colonized. As I write in my book, “The only remnants of the failed occupations [by Italians] seem to be terrific Italian food and the prolific use of the word ‘ciao.’ Ethiopia belongs to no one but itself.”

The story of the country’s connection to coffee began at least 1,500 years ago in Kaffa, a province in the southwestern highlands. It is said that this is where a goatherd named Kaldi noticed his flock became increasingly animated after eating the berries off a small, leafy tree. Kaldi sampled the fruit and subsequently experienced the same rush, thus starting our relationship with a crop that has become the world’s most traded commodity, second only to petroleum.

Ethiopia is the fifth-largest coffee-producing country in the world and, according to the International Coffee Organization, the continent’s second-largest coffee exporter (after Uganda). The crop fuels the economy by providing a source of foreign currency and, more importantly, work for more than 15 million people. “Coffee is everything,” Frehiwot Getahun, the manager of the Kafa Forest Coffee Farmers Cooperative Union, explained to me. “It is identity. It is employment — not just for the farmers, but for the managers, labourers, administrators, truck drivers, cuppers, traders.”

I met Getahun during a trip dedicated to meeting the people — and understanding the labour, the many hands — behind coffee. The substance is woven into the fabric of not only the economy, but also the culture. “It is like food,” he said. “You have it in the morning, the afternoon, the evening. People live on — and through — coffee.”

Yet those who harvest and grow the crop exist on very thin margins. According to the Fairtrade Foundation, 80% of coffee is cultivated by smallholder farmers who, according to agricultural economist Mick Wheeler, typically receive only 10% of the final price. The farmers I met at the Yirgacheffe Farmers Cooperative Union told me they are “blessed” with delicious coffee (an understatement), but what they lack are things that are often taken for granted: access to good roads and modern technology. One of the machines 52-year-old farmer Alemu Seda showed me was from the 1980s, and in poor condition.

Coffee from this region is celebrated the world over. The people who make it possible should also be recognized — and better compensated — for the intensely satisfying fruits of their labour. For what their hands bring forth day after day.

Ethiopians’ relationship with coffee is revealed not only through the crop, but also in the cup, through a ritual known as the coffee ceremony. The event, held formally in public and informally at home, celebrates community and connection. It, along with the expansion of coffee cultivation and consumption into Yemen under the Ottoman Empire, led to the café culture that became entrenched in Europe and, later, extended to North America. It is the true precursor to how we commune over coffee today.

During the coffee ceremony, frankincense perfumes the air while friends and neighbours gather before a simple, but elegant, set-up: a cast-iron griddle set over fire, plus a metal hook used to slowly turn the coffee as it roasts — a process that transforms sea foam green beans to a brown the colour of earth and skin.

After the beans cool, a mukecha and zenezena (mortar and pestle) are used to grind them into a course powder. Those grounds are mixed with water and boiled in a jebena, a clay coffee pot from which coffee is poured three times. The initial serving is thick and intense; the second, watered down, is slightly less so; and the third and final serving is even more delicate, as it is diluted once again.

The ceremony is intentional and slow, forever reminding me that I am on Ethiopian Standard Time — and that I am in community. These coffee breaks are not solo endeavours; they are intended to spark conversation and spur conviviality. The tradition is one that began thousands of years ago—much before the rise of European coffeehouses — following the Ethiopian invasion of southern Arabia in 525 CE.

The beans found in Ethiopian markets and roadside stands are referred to as “bunna” — coffee. Their packaging does not list an origin, but they come from within the country, harvested from plants that are typically grown on small garden plots, likely from seeds that have been saved or saplings from local agricultural extensions. And the coffee that comes from those plots is remarkable.

“Coffee is known for tasting different from place to place,” explains Specialty Coffee Association of America Chief Research Officer Peter Giuliano, “but there is more flavor diversity within Ethiopia than in all other countries of the world combined. Every flavor coffee is capable of producing can be found in its birthplace.”

However, the genetic diversity held in those seeds — in Ethiopia and around the globe — has diminished, a reflection of broader changes in agriculture toward a more homogenized food system. It is, again, why Ethiopia is so critical to the sustenance of coffee. While the world relies on fewer and fewer varieties of coffee that are susceptible to an array of devastating diseases, Ethiopia contains the most diversity of the plant, both on farms and in the wild. It is our backup system for addressing challenges the plant might face in the future.

This is what I reflect on as my hands make their way to the cupboard, to the small grinder with which I pulverize my coffee, on to the kettle, the Aeropress, and the cup. That this moment, this vibrant yet soothing start to my day, is made possible only through the hearts and hands of those for whom this beverage is their birthright.

Simran Sethi is a journalist and educator and a fellow at the Institute for Food and Development Policy. She writes and reports on food and culture. She is the founder and host of The Slow Melt, the award-winning chocolate podcast lauded by CBC Radio, and is the author of Bread, Wine, Chocolate: The Slow Loss of Foods We Love, named one of the best food books of 2016 by Smithsonian. Follow her on Twitter or Instagram: @simransethi.

Want to get up close and personal with the birthplace of coffee? G Adventures can get you there. Check out our small group tours to Ethiopia here. 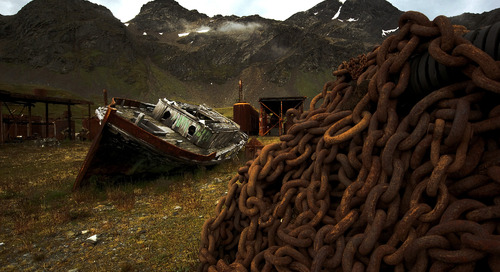 This tiny south Atlantic island is the last resting place of one the world's greatest polar explorers, Erne...

Where to see some of the world's great animal migrations

How to spot animals on the move, across the globe