Home » The Looptail, The Travel Blog Powered By G Adventures » The joys of flying overseas with a first-time traveller
× Share this Article

The joys of flying overseas with a first-time traveller

When I first saw the Mona Lisa at the Louvre, I was disappointed. It’s deceptively small, almost hidden by the masses of people who crowd around it, brandishing selfie sticks like swords that slice through the throngs.

But while I was unimpressed, my disappointment didn't come close to that of my mother. When we finally broke through the crush of people to get in front the thing, she was completely ambivalent; almost uninterested in seeing something up close that she’d seen reproduced in hundreds of mediums, for decades. We had exactly one minute to either a) take a photo or b) consider it, thoughtfully. We gave 30 seconds to each. She turned to me and said with a shrug small enough to feel innocuous, but one I knew to be venomous, and said: “it’s… fine.”

This was in April. The trip was my first to Paris, and to say the city is beautiful fails to accurately capture how magnificent it is. Back home, Toronto battled a snowstorm, but Paris was luminous; a pristine mix of green and blue and pink reflecting off the Seine. Magnolias bloomed along Avenue Gabriel; crisp, red tulips and creamy, butter-yellow daffodils dotted the grounds of the Tuileries.

Paris was perfect for myriad reasons. I needed a break from a life that was, at that point, filled with apartment-hunting, somewhat frantic freelance writing, and general winter ennui. I’d long been obsessed with Parisian culture, am unabashedly still supportive of gaudy musicals and saccharine romance like Moulin Rouge!, and deeply in love with the Palais Garnier, The Phantom of the Opera, and general French decadence.

But when I finally travelled to Paris, the City of Light was most special to me not because I was finally bringing to life my own obsession, but because I had the privilege of sharing in my 60-year-old mother's first trip across the ocean.

Last year, my mother joined my sister and I on a trip to New York, as a test trip in preparation for Paris because, at 58 (at the time), she had actually never been on an airplane. Frankly, my mom — a single mother for most of our lives — had never really travelled at all. She watched from the sidelines as her daughters developed with a penchant for (and an almost financially disastrous addiction to) going abroad. She drove us to airports in Toronto and Buffalo for years, once sitting in the Buffalo airport for 12 hours while our flight from JFK in New York was delayed because of a rainstorm. She did these things for us selflessly, because she wanted us to live a life she was never able to live.

My mom never thought she could travel. She’s from a small town in Northern Ontario whose population, for the most part, is born there dies there. She was never raised to be curious about the world around her. Travel was expensive, and when you have two kids to feed on a single income, it becomes the lowest priority. It becomes frivolous.

But now that my sister and I are grown, our mother finally has the chance to participate in a life she previously thought she wasn’t allowed to have.

The first, magical thing that happened in Paris was when, while I waited for my mom and sister to return from the restroom, Grace Coddington, Vogue magazine royalty, walked into my luggage by accident. My mom would tell me later that the iconic editor had walked past her in the restroom and they smiled at each other, just two women just going about their day at the airport. This is, perhaps, the best portrait of my mom: largely unconcerned with the specifics but entirely open to everything.

Our hotel was steps from the Arc de Triomphe but far enough away from the enormously busy and tourist-dense Champs-Élysées. Jet-lagged and sweaty, we climbed the narrow, winding steps of the Arc on our first day in the city. My mom, who complains often of foot pain, barely mentioned it that day — or on any of the the following days of our nearly two-week-long trip. She gladly, willingly, walked the claustrophobic steps to look down upon the city from the Arc for the first time, to watch her daughters grow giddy at being in a place they had fantasized about for so long.

The next day we walked to the Palais Garnier. When I’m excited to be somewhere, I still — at 30 years old — get temperamental. My mom and sister responded gracefully; tempering my need to be in a place at a specific time by walking leisurely behind me up the opera house’s sloped path to its grand entrance. We’ll get there, so be calm, is what their body language said.

That the grandeur and beauty of the Palais Garnier exists fills my heart still. But my mom was more cavalier: she leaned casually against a bust of a famous French patron in the Rotonde du Glacier, taking a break to watch my sister and I discover the space. Was she allowed to? She didn’t care. She balanced our breathlessness with an appreciative irreverence — if such a thing can exist.

My sister took us to France because she was in a wedding, so while she was busy with her duties as a bridesmaid, my mom and I were left to discover the city on our own. One day we got sandwiches and pastries from a patisserie I loved called Maison Marnay, near Le Centre Pompidou, and walked to the Jardin Luxembourg to sit in the shade on the first hot day in the city.

The next day we ventured to Montmartre, avoiding the steep steps up to Sacré-Coeur by walking the inclined Rue Lepic, passing fish markets and cheese and chocolate shops on the way. She took photos of me in front of the wisteria, and I told her about Hemingway and Fitzgerald — writers she'd never been interested in — and their love of Montmartre. She listened earnestly and intently. We ate sandwiches on the steps of Sacré-Coeur before going in. My mother's Catholic upbringing bubbled to the surface as she solemnly took in the space.

The day we went to Versailles, I felt not only the enormity of the place, but the significance of being there with my mother. To be able to say afterward that we walked the Hall of Mirrors together, the gardens, staring at the same immaculate, meticulously maintained green space. This day, the entire trip truthfully, wouldn’t be something to retold to her in fragments after she picked us up at the airport. She was there, living, feeling, and experiencing it.

Travelling with a parent is tough; you can sometimes still see them as an authority figure, rather than a person and a friend. My mom deserves to see the world for so many reasons, primarily because she gave up whatever life she could have had to ensure my sister and I had the lives we wanted. She deserves the joy of travel. And the world deserves to see her experience that joy — I can say firsthand, it's an incredible thing to witness.

Want to see Paris for yourself (or, maybe, with your parent)? G Adventures can get you there. Check out our small group tours to France here. 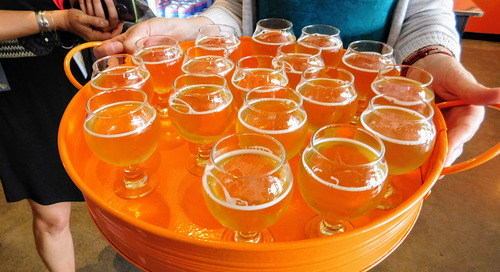 From Victoria to Quebec City, beer drinkers can enjoy some top-notch pints 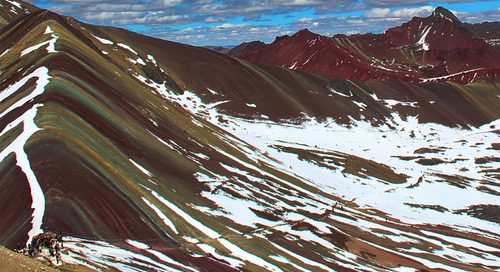 10 of your best photos of Peru's Rainbow Mountain