If you ever want to feel like you are part of something wild — truly wild — you must find yourself eye-to-eye with one of Madagascar’s more than 100 species of furry, wide-eyed lemurs. White, brown, red, black, as big as a dog, as small as a mouse, timid and silent or boisterous and strong, the variety of these primates is a visual feast for the traveller who seeks something different.

With their large eyes and fox-like faces, lemurs earned their English name from the Latin word lemures, for “ghosts.” But luckily for travellers, they’re no apparition. Like nearly 90 percent of Madagascar’s plants and animals, these exotic mammals are endemic to the island nation and found almost nowhere else on Earth.

With their large eyes and fox-like faces, lemurs earned their English name from the Latin word lemures, for “ghosts.” But luckily for travellers, they’re no apparition. Like nearly 90 percent of Madagascar’s plants and animals, these exotic mammals are endemic to the island nation and found almost nowhere else on Earth.

Starting in the capital city of Antananarivo and driving east toward the Indian Ocean, our group first explored the private and protected Peyrieras Reserve. Up, up, up along a dirt path through a neon-green forest, we were quickly rewarded with the first of many lemur sightings. A group of five brown lemurs who were all too eager to take kumquat snacks from our trained trail guides.

Just up the trail, a group of Coquerel’s sifaka lemurs mesmerized us with their yellow eyes, white fur, and long legs. Like a cross between a teddy bear and giant panda, these gorgeous lemurs maintain a vertical perch and leap through the trees like giant frogs, using just the strength of their back legs to propel distances of more than 10m (32 ft). We were lucky enough to watch this athletic display, and even spy mama sifakas with infants clinging to their bellies.

Back in our bus and continuing east, the next stop on our lemur trail was at one of Madagascar’s natural jewels: Andasibe-Mantadia National Park. With a land area of more than 150km² (58 mi²) and dense, humid forest covered with vines, moss, ferns and huge ant and termite nests, this trek is the real deal.

To borrow a film reference, our early morning hike was like something straight out of Gorillas in the Mist, (well, minus the gorillas) — with fog and dew enshrouding our trek. Arriving at the protected Indri Special Reserve, our guide led us off-trail and we meandered through the trees; an eye and ear up toward the canopy. One of the strangest, most piercing, and awe-inspiring sounds in all of nature soon rewarded us: the call of the Indri.

Indri lemurs are the largest and loudest on Earth. Black and white with big fuzzy ears and powerful legs, they call out to each other with a high-pitched wail that vibrates right through your core. It is mythical, startling, and truly awesome.

Also in the reserve are golden-crowned sifakas, cousins of the Coquerel’s, and possibly even more beautiful. After scrambling down dense hills, and clinging vines for balance, our group came to a quiet spot to sit in the brush where a family of these social and very playful lemurs were going about their day. Only several arms’ lengths away from us, an apparent sibling pair tumbled down a tree trunk and wrestled in the dirt, while a new mom tried to keep her curious baby from wandering away. Nearby a papa sifaka stayed close, meantime, nuzzling and grooming his mate. We all stared; enthralled, snapping pictures, and grateful for the encounter — if a little voyeuristic.

Next on the trail was Ranomafana National Park, a dense and mountainous tropical forest in the Fianarantsoa province of southeastern Madagascar, with an altitude ranging between 800–1,200m (2,624–3.937 ft). Some 12 different lemur species are said to be found here, but the park is best known for its critically endangered golden and greater bamboo lemurs, which feast on Madagascar’s giant bamboo trees.

Seeing these small, shy primates in their natural habitat requires some sturdy boots and extra physical effort, which members of our group agreed was the most challenging part of the trip. But the dense scramble was worth it: Tarzan fantasies were fulfilled.

We travelled southwest to the Anja Community Reserve on the edge of Isalo National Park, the country’s second oldest and largest national park. Anja is known for having some of the most accessible groups of ring-tailed lemurs in the country, whose population has grown from 150 to 850 in recent years thanks to smart conservation. If you’ve watched the DreamWorks Animation films (think King Julien), you know these playful critters.

Hiking into the reserve — which employs craftswomen, wilderness guides, and youth through tourism dollars — the terrain was distinctly different: drier, rockier, more monochromatic. In this central highland part of Madagascar, sandstone massifs jut out from the earth and winds whip a frenzy. But a short walk is all it takes to encounter our first “conspiracy” of ring-tailed lemurs, or group, as they’re called. Huddled up in striped furballs to keep warm against the winds, these female-led lemurs offered the kind of picture taking that makes your neck ache. In the best way.

There were other lemur species and stops along the trail, which is more dispersed than connected, but will certainly deliver incredible wildlife viewing and picture opportunities your friends will envy. And thank goodness it does. As Madagascar works to recover from a recent past of political instability and economic isolation, and invests more in cultural and wildlife tourism, these furry brand ambassadors could prove key to attracting adventure travellers.

G Adventures runs a number of departures in Madagascar’s encompassing a wide range of departure dates and activities to cater to different tastes. We’re thrilled at the prospect of showing you this big blue planet of ours — check out our small group trips here. 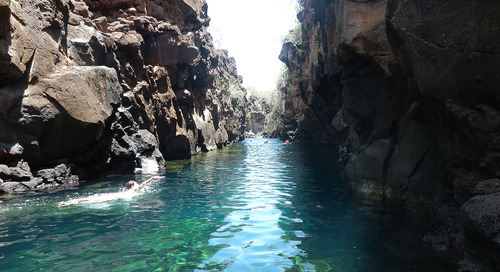 Guidebook writer Regis St Louis explains how the Galápagos can be a profoundly inspiring place, not least o... 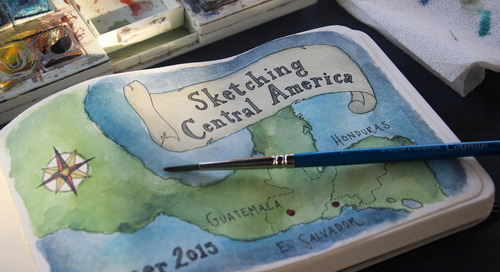 Artist and writer Candace Rose Rardon on the value of the scrapbook as a way of honouring a journey’s fleet...