Home » The Looptail, The Travel Blog Powered By G Adventures » How Ciclovia paves the way for green, active travel
× Share this Article

How Ciclovia paves the way for green, active travel

On April 22, communities around the world will observe Earth Day, by celebrating all the natural wonder our planet has to offer, and reflecting on the environmental risks, threats, and challenges the world's citizens have yet to overcome. In the week leading up to April 22, the G Adventures blog will be looking at how responsible travel can help make the world a better place. Here, Sinead Mulhern investigates Ciclovia, the bikes-only street takeover that's growing in popularity in South America.

As environmental issues continue to plague our planet, many are shifting to greener, more sustainable habits. And when booking a trip, many now search for destinations — or itineraries — that complement their lifestyle choices. For that reason, Latin America should be top on the list for active travellers who actively seek to preserve the planet — if only because of Ciclovia.

“Ciclovia” (meaning “bike path” or “cycle way”) is a Colombian-born event in which big cities shut down their main streets each Sunday to allow cyclists, walkers and runners to occupy major metropolitan arteries, without the risk or nuisance of motor vehicles. Now prominent across Latin America, the benefits of Ciclovia are twofold: firstly, the city significantly cuts down on car pollution; secondly, citizens are incentivized to get active, since they have the streets all to themselves. The former is of the utmost importance considering that the World Health Organization estimates that 80% of people living in urban areas are exposed to extremely high levels of pollution.

Since its inception in Bogotá in the mid-1970s, Ciclovia has spread to hundreds of countries worldwide — but it still thrives the strongest in major hubs in South America. Looking to check it out for yourself? Below, a few cities where the streets are buzzing on Sundays:

Colombia’s capital is without a doubt one of the best spots to participate in Ciclovia. Visitors who travel to the birthplace of the cycling event can expect more than 120 kilometres of car-free streets, starting from 7am to 2pm. And when it comes to fostering an athletic spirit amongst its citizens, Bogotá is a leader: With more than 350 kilometres of bike lanes, it’s respected as one of the world’s cycling capitals. Millions of people hit the streets to enjoy Ciclovia, which is proof in itself that the city does cycling right.

There are more than 60 Ciclovias in Colombia, and Medellin's is one of the most popular with visitors. Colombia has experienced a 300% increase in its number of visitors over the past 12 years, and Medellin is the third-most popular spot for tourists. The Sunday vehicle-free action is a great way to take a tour of the city and its neighbours Envigado and Sabaneta. Those who do visit will see plenty of runners, skateboarders, pedestrians, and cyclists — plus roadside booths providing snacks and fresh fruit juices to replenish tired bodies afterwards. With Medellin also working to reduce cars on roads during high pollution times, Ciclovia is natural fit for the city.

One of Argentina’s most popular destinations, Buenos Aires, earns bragging points within the cycling community as it has ranked 14th on the list of the 122 most bike-friendly cities in the world. It’s also home to a large group of fit folks, with 180,000 residents naming their bike as their go-to method of transportation. The city started its own Ciclovia in 2009.

Rosario, also in Argentina, offers cyclists more than 100 kilometres of lanes weaving throughout the city. On Sundays, motor-vehicles get the boot, to allow cyclists and runners to roam free of traffic for a 28-kilometre stretch.

There may be a consensus amongst active travellers that to get a good workout, one must venture outside of the city’s boundaries. In Sao Paulo, a city with a population of nearly 12 million, that's not quite true. Car-free Sundays are relatively new to the Brazilian city but, since 2015, those who live in São Paolo get to enjoy the usually bustling Avendida Paulista without the mayhem of cars and motorcycles. A bonus: the avenue is known for attracting street artists. Nothing like good entertainment to make the kilometres feel extra breezy!

Once a week, this Chilean destination offers a marathon-distance space to roam without the annoyance of exhaust fumes and blaring horns. Seven of Santiago’s boroughs close streets to foster fitness activities. If you;re checking it out for yourself, be sure to take a hydration of selfie break at Parque Metropolitano, which is South America’s largest urban park.

Check out our small group tours to Chile here.

Ecuador’s capital holds “Ciclopaseo” every 15 days as a way to connect many of the city’s popular hotspots (think major parks, streets and the iconic historical centre). Active travellers who prefer to run or walk without lugging heavy bottles should note that donated water is provided along the course — and that’s especially handy for the brave souls looking to tackle the full 30 kilometres. Those who enjoy Quito’s car-free mornings have a group of young activists to thank: the bunch used to plan rides to the historical centre of the city, stopping their bikes in the roads to draw attention to more sustainable modes of transport.

Check out our small group tours to Ecuador here.

You wouldn't guess by looking at it on a weekday, but the prominent Paseo de la Reforma avenue is a prime spot for a Sunday morning workout. For the past 10 years, the street is a no-go zone for cars on Sundays, which creates a space for 50,000 citizens to pedal, rollerblade, run — or even take part in a zumba class. That’s a big deal when a there’s approximately one car for every four of the city’s 21 million people. Known as “Muevete en Bici,” these vehicle-free Sunday routes aren’t in short supply: for those fit enough to go the distance, the roughly 56 kilometres of free space are all yours.

The early-bird traveller in your group will be excited to get up and out for the 6am start of Panama City’s Ciclovia. Enjoy the sunrise while cruising along the La Cinca Costra route, which starts at Panama Viejo. Be sure to use the hydration stops along the way.

Check out our small group tours to Panama here.

How to reduce your footprint when you travel 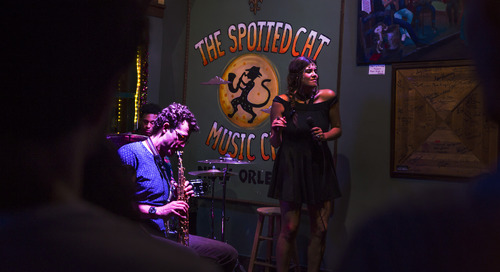 From New Orleans to Tokyo, here's where to go if music's on your mind