Home » The Looptail, The Travel Blog Powered By G Adventures » There's magic on the Chilean island of Chiloé
× Share this Article

There's magic on the Chilean island of Chiloé

I feel like I’ve been here before. Standing on the desolate beach in Cucao, on the Pacific coast of Chile’s Chiloé island, I get a distinct sense of déjà vu. Maybe that’s because, at the edge of the world, I’m reminded of a dream in which I’m hovering over the sea like an albatross, buoyed by its scent and sound. In front of me, there’s the fluidity of the ocean; behind me, the reassuring steadiness of land. The sandy fray of my real Finis Terra is chewed up by the crashing waves, and like in my dream it’s a point zero where the ripples of the past dissolve as quickly as new designs are allowed to form.

I’ve come to Chiloé in search of magic. “Chiloé mágico,” as the island some 1,200 kilometres south of Santiago is referred to by locals, is a place where people still get together for mingas: community actions organized to, say, help someone build a house or move a barn, which always conclude with a feast. It’s a place where my friend Mónica, who hosts me during my visit, warns me of El Trauco, a mythological creature who has fathered — somewhat inexplicably — many of the island’s children. Chiloé is a tapestry woven from the colours of the rainforest and the temperamental sky. It’s where fringes of iridescent green hills are swallowed by the steel-blue sea. It’s a place where you can still find respite from harried city life.

Walking north along the sand dunes in Cucao, I pass free-ranging bulls chomping on grasses and shrouds of mist clinging like wayward fishing nets to trees. Other than a group of hikers that disappear in the distance, I am alone.

But not for long. When I reach Huentemó, I stop in at the Hospedaje Chucao. Jorge Guenuman Naín, the host of the B&B and grand chief of the Huilliche Indigenous people who live in the hamlet, puts a kettle on his wood stove and soon we’re drinking tea. A kitten tugs at my shoelaces while Guenuman tells me he’s been here forever. “It’s not always an easy life, but it’s a good life,” he says as he peers past the hydrangeas in his garden to the sea. He fishes and collects seafood from the shore, plants and tends trees for firewood and fruit, grows potatoes, and raises chickens and cows. He takes a nap whenever he feels like it.

Like Guenuman’s daily life, chilota culture is at once buoyed by the surrounding swell and firmly tethered to the land. Zigzagging across the island, I see sheep dotting the shaggy carpet that undulates from the gentle Interior Sea, which separates the island from the continent, and the wild Pacific to the west. Hit the coastal roads and you’ll discover that penguins and porpoises are a common a sight on a Sunday drive. It occurs to me that this overlapping of surf and turf is a visual explanation of the most traditional of foods here. Curanto, which at the Tierra Chiloé hotel is cooked over hot rocks that line a hole dug into the ground, is a stick-to-your-ribs potion of potatoes, clams, chicken, mussels, and fish; a meal that lets your mind wander out to sea while keeping your feet resolutely planted on earth — especially once you’ve eaten so much you can't move.

One afternoon, I drive along a windy road from Castro, the capital, to Quemchi, a town huddled in a protected cove. It’s an calm environment that has helped make aquaculture a booming business here and elsewhere on the Interior Sea. I park and walk over to the Francisco Coloane Museum, housed in what was once the author’s home. As I approach the bright yellow front door, a woman opens it up and greets me with a smile. She introduces herself as Ximena, and explains that she is the caretaker. I ask Ximena what makes Chiloé so special to islanders, and so exotic to mainlanders. “I’ll show you a film,” she says, and leads me past a wood-fired stove to an adjoining room.

The film is of a minga, showing a community moving an entire house, using oxen, from one island to another. Ximena laments that this traditional way of life is fading. “More people leave the land to take jobs in the salmon farms around here, or they go to the continent,” she says. As I leave, I think about this tension between the old ways and progress, between tradition and modernity. They’re terms that carry difference meaning depending on who you are, and whether you’re looking for magic or a practical way of living, whether it’s based on a simpler life around a sense of community or a life with more material wealth.

Back in Castro, I meet up with Juan Carlos Viveros at Café Blanco. Over lattes, he tells me about Defendamos Chiloé, a non-profit organization whose name means “let’s defend Chiloé.” He lived for many years on the continent, running a business in Santiago, but moved back after burning out. He realized that the island still had a sense of magic that he hadn’t remembered, and decided he needed to be part of a movement to preserve chilota culture and traditions. When a recurring proposal to build a bridge to connect the island and the mainland resurfaced, he started Defendamos Chiloé. “What we have here on the island is very special,” he says, stirring a spoonful of sugar into his mug. “And what keeps it special is the fact we don’t yet have a bridge. We're not isolated — we have the ferry that connects us to the continent — but we are keeps big industries like logging away. I’m all for progress. But not at any cost.”

After our meeting, I walk to the city’s market. It’s is in an old part of town flanked on one side by colourful houses that teeter on palafitos, stilts that keep them above ebb and flow. Fishmongers offer hake and Humboldt squid, mussels and merluza. Fishermen pack their catches in Styrofoam containers for shipping, as men in slicks and woollen toques slice open sea urchins. I need another coffee to wash down my sashimi samplings, and walk back to the main plaza. The mobile barista I’d seen earlier is still parked in front of the church, and I get my cortado just before he closes shop for the day.

On my way to the ferry in Chacao, I opt for the slow route, hugging the winding road that traces the Interior Sea. Not quite ready to leave the island, I linger at wooden churches that in some towns are clad with weathered shingles and in others burst with a chorus of colours. Many of them are on UNESCO’s World Heritage list, monuments to old construction techniques that draw from boat building to erect pillars and vaulted ceilings and build window casings and floors — all out of wood. They are an architectural marvel in their own right, and I imagine them as beacons welcoming fishermen and sailors back to shore. Maybe they saw magic in these structures, if not in the sermons held within.

Driving onto the ferry that will take me back to the mainland and closer to my reality, I feel a twinge of melancholy. As the ferry sets course for the continent, I take a seat on the sunny deck. Soon a pod of porpoises swim by, followed by a group of penguins torpedoing alongside the boat. I settle in, and my mood shifts, because I know that I can always come back. And now I know where to find the magic.

Want to see Chiloé for yourself? G Adventures can get you there. Check out our small group tours to Chile here. 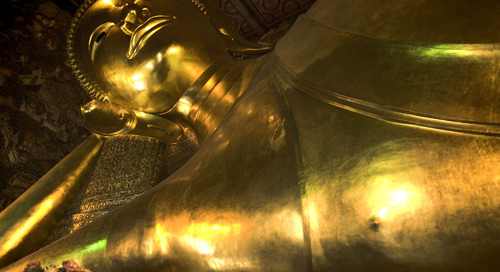 What is Thai massage?

Hint: it's a little different than the Swedish stuff