In late 2017, the South American nation of Peru was named by the World Travel Awards as the world's leading culinary destination — for the sixth consecutive year. If, somehow, you're still unfamiliar with the food that makes Peru a hotspot for culinary travel — or if you simply need a reminder — here's a taste of the country's 10 best dishes. Buen provecho!

Probably Peru’s best-known culinary contribution, this seafood dish is made from fresh, raw fish, which is cured with citrus juices (usually lemon or lime), and seasoned with hot peppers.

This dish combines Peruvian and Chinese influences. It’s sautéed beef (saltado means “to jump” in Spanish, which is what sautee means in French), cooked with soy sauce, tomatoes, and onions, and traditionally mixed with French fries and served with rice.

Thin slices of raw fish served with a spicy sauce. It’s similar to Japanese sashimi (though served without rice), or carpaccio (though cut much thicker).

Peru is famous for its potatoes, and this dish — which blankets boiled spuds in a bright yellow sauce (huancaina sauce) made from queso fresco, evaporated milk and aji Amarillo.

Often sold by street vendors, these are savoury skewers of marinated meat — traditionally beef heart — that are grilled, and often served with a piece of bread or boiled potato. Antichuchos are traditionally eaten during Peru’s independence day celebrations.

Don’t confuse Peruvian tamales with their (arguably better-known) Mexican counterparts. In Peru, tamales are large, wrapped in banana leaves (rather than corn husks), and use yellow corn (rather than white). They’re commonly filled with chicken, boiled eggs, peanunts, or olives.

This Peruvian version of rotisserie chicken is blackened, seasoned with aji peppers, and served with fries or potatoes, and salad.

These rounds of dough mixed with squash and/or sweet potato are deep-fried, then smothered in a thick molasses syrup. Think of it as doughnuts-meets-funnel cake, Peruvian style — and with vegetables added in (so it’s healthy, right?).

What millefeuile is to France, milhojas are to Peru. This flaky pastry substitutes the pastry cream or custard of the French dessert with dulce de leche — though it can also be found filled with pastry cream and covered in in dulce de leche instead.

Chifa is more a style of cooking than a dish: The term refers to the combination of traditional Chinese dishes — such as chow mein or wonton soup — with Peruvian spices or ingredients.

Hungry for a taste of what Peru has to offer? G Adventures can get you there. Check out our small group tours to Peru here. 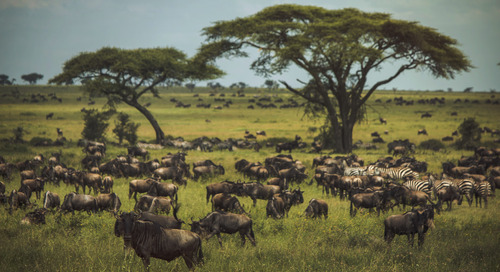 The Serengeti Migration: By the numbers

A statistical look at the incredible event 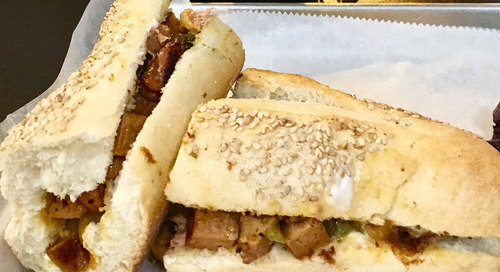