Home » The Looptail, The Travel Blog Powered By G Adventures » Philly cheese-fake: On the hunt for Philadelphia's best meatless sandwich
× Share this Article

When I went vegetarian nearly 10 years ago, the common response was confusion: “What?”; “Why?”; “So you’re only eating salad?”

These days, things are different. Over the past decade, vegetarianism and veganism have become mainstream enough that most people know and understand what they are, and restaurants cater more and more to those who want to eat plant-based meals. Those people don’t just want salad; they sometimes also want dirty, indulgent “meat.” Or, to be more specific: I want dirty, indulgent “meat.”

So while the debate rages over who in Philadelphia makes the best real cheesesteak, the city’s namesake foodstuff — is it Pat’s? Geno’s? Jim’s? Steve’s? — I travelled to the City of Brotherly Love hell-bent on finding fake stuff that tastes closest to the real deal, even if that meant trying five different "cheese"-slathered "meat" buns in just three-and-a-half days.

Here’s how it went down.

After nine hours on the road, we were tired and hungry, and Govinda’s Vegetarian, in nearby neighbourhood Center City, served up my first “cheesesteak” of the trip — after only an hour in Philly.

Their Philly Pepper Steak sandwich was delicious, served on a crispy sesame bun with a small side salad. The veggie "meat" and their “special gravy and cheese” are cooked together, so it was plenty flavourful, if not particularly saucy.

At the time, I was looking for something a little more down ’n’ dirty. In retrospect, I realize that, had I tried it later in the trip, the Govinda's sandwich would have been a nice, sophisticated break from more typical sandwiches, which come swimming in cheese (or "cheese") sauce. Cheesesteaks, even vegetarian and vegan, run the gamut, and this one was a warm, peppery, homey option — the perfect antidote to a long journey.

… and the perfect stomach-liner for a night of karaoke and drinking Philadelphia’s “city-wide” — a four-dollar drink special that you can find at almost all dive bars city-wide (get it?), consisting of a can (or sometimes pint) of Pabst Blue Ribbon and a shot of whiskey. By midnight, I’d be singing Britney Spears’ Stronger.

We spent the second day of our trip wandering around up-and-coming Fishtown, a hip neighbourhood with great bars and restaurants — including Joe’s Steaks, a Philadelphia restaurant with two locations that specializes in cheesesteak and provides a fake meat option. I made a note of it on our bleary-eyed way to a hair of the dog day-drink at nearby Frankford Hall, then returned half in the bag for a bite.

Maybe my mind was swayed in part by the establishment’s old-timey booths, but Joe’s vegan cheesesteak sandwich (pictured at the top of this post) felt like the real deal. It was a messy handful, with fake meat and warm cheese sauce (I went for a cheese sauce that was dairy-based, but there was a vegan option) dripping out of it. It was dotted with mushrooms and onions, and the bun was soft and airy. For just $5.50 for the six-inch (there was a footlong option), it was the cheapest sandwich too.

…why only the six-inch, you ask? Because within an hour we’d arrive at:

As must be clear by this point, I am nothing if not a glutton for punishment. Blackbird’s Seitan Cheesesteak has a reputation as Philadelphia’s best (and biggest) vegan cheesesteak sandwich, and I went in still stuffed from Joe’s. It was, I admit, my first rodeo.

But I was ready, and Blackbird didn’t disappoint. The seitan — which, for the uninitiated, is a particularly meaty type of wheat gluten — was smoky and delicious, thinly sliced and charred around the outside; the vegan cheese was creamier than most vegan cheeses; the bread was golden and delicious. The Northern Liberties joint — one of two locations in Philly — was blasting metal, and the staff were friendly, cracking jokes as they made our food.

It was an all-around excellent experience, and the best strictly vegan sandwich I had, but in all honestly — and I promise it wasn’t just because I was stuffed — it didn’t quite match the quality of Joe’s. So, vegans: you have to try this. Vegetarians: try Joe’s first, but go here, too.

Eclectic South Street bar Tattooed Mom has a killer jukebox and a late-night menu that includes Tater Tots, waffle fries and, yes, a vegan Philly cheesesteak sandwich. It also featured a bumper car table — so, obviously, it made our list of places to check out.

Tattooed Mom's take on the city classic was formidable, featuring "meat" so seemingly real that I asked twice — once when I saw it, and again after I bit into it — whether it was actually vegan. It was a textural delight — the vegan cheese, especially — but it wasn’t the most flavourful sandwich. In fact, by the end, it verged on blandness. You should never crave Tater Tots more than a cheesesteak.

Also, just a note: don’t expect the best service here. We stood by the entrance for almost 15 minutes before finding out it was a seat-yourself establishment, and got treated like idiots for asking the wrong staff member for another drink. We left and found another karaoke bar, where we were treated with respect both before and after my shimmy-heavy rendition of Franz Ferdinand’s Take Me Out.

The last fake Philly cheesesteak I had was the most difficult, in a few ways. For one, by this point, I never wanted to see a Philly cheesesteak sandwich ever again as long as I lived; plus, to add to my gastrointestinal stress, we had to brace a classic Nor’easter to get to HipCityVeg — and my ultimate (as in: final) sandwich of the trip.

The classic burger ingredients in Philly chain HipCityVeg’s Philly Steak are unconventional — grilled onion, mushrooms, lettuce, tomatoes, ketchup, and a sauce that evokes mayonnaise more than it does cheese — but they combined with the "meat" for an intensely flavourful sandwich. The snowy trek was worth it.

Because of how different it was from the other four sandwiches, it’s hard to say where it ranks, but that’s a good thing: the Philly cheesesteak, even in its vegetarian and vegan forms, is not a sandwich for purists.

There was so much variance that it’s hard to pick just one as Philadelphia’s best fake Philly cheesesteak, but because I wanted the closest approximation of the real, classic sandwich, I think I have to go with Joe’s. That said, I was truly in sweet, sweet love with Blackbird’s sandwich, too.

And it’s hard to say that I wouldn’t have found plenty of other delicious options, had I a few more days in Philadelphia, but my body was also sort of glad to see the end of my intense Philly cheesesteak adventure. Now, I’m off to eat some leafy greens, like a good vegetarian.

Eager to sink your teeth into a Philly cheesesteak sandwich — vegan or not? G Adventures can get you there. Check out our small group tours of the United States here. 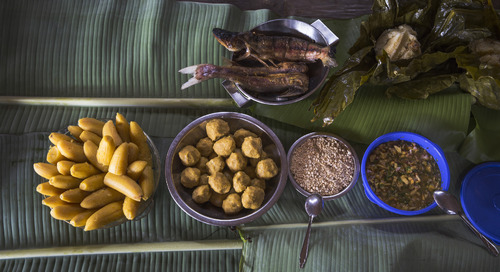 There's much more than ceviche

From clocks that go backward to zebras in the streets, La Paz is one of the world's most amazing locales