Home » The Looptail, The Travel Blog Powered By G Adventures » How Medellin transformed from dangerous to innovative
× Share this Article

How Medellin transformed from dangerous to innovative

Colombia is most certainly a country with a past.

It seems everyone we met on a recent trip to the South American country had some kind of connection or memory of "those days:" the ones with which I became semi-familiar by watching Narcos on Netflix prior to travelling. Yet despite this — or maybe because of it — what I found after 12 days in Colombia was a country shaped by its past, but with a strong desire to leave "those days" exactly there. Colombia was a welcoming and gracious host, keen to make a good impression. And like all good hosts, it knows how to entertain and tell a good story.

The best story, in my opinion, is how the city of Medellin has transformed itself from one of the worst places on the planet into one of the best.

In 1993, Colombia's homicide rate was 420 per 100,000 — the highest in the world; Medellín's was twice that. Comuna Trece (Community 13) is an over-populated and low socio-economic zone of Medellin that crawls up along the west hills of the city; in the mid-1990s, it was simply the worst place within the worst place. There are thousands of brick, wood, and cement homes stacked close to and on top of one another up and down the city's steep slopes. It was a hotbed of paramilitary, guerrilla, and gang activity, and its location is ideal for crime, leading directly to the main highway — San Juan Highway — which facilitated easy transportation of guns, drugs, and money. It has narrow access points from the city below, and with a significant bounty on offer for murdered police officers, there was no law or control on any activities.

Over three days in October 2002, the Colombian military carried out Operation Orion to overthrow rebel groups. Comuna Trece was at that time connected to the main city of Medellin through the instalation of a series of cable cars that integrate directly with the city’s main transportation network. Residents of Comuna Trece access this transport at a reduced rate, given their lower income zone.

Comuna Trece, at last, was integrated into the city and had freedom to begin life a new. In the last few years, it has transformed into a place of optimism and is now a livable, vibrant, and flourishing part of Medellin. Owing in no small part to its transformation, Medellin was named the most innovative city of the year in 2012.

On our trip to Medellin, we were guided through the streets of Comuna Trece was a young fellow called Chota. He has strong memories of how things were under guerrilla, paramilitary and gang control.

There are many stories to tell, and Chota chooses to tell them through his art. He is a street artist, and lets his works tell the history, and the transformation, of his community. He walked with us, and stopped at many different places in front of his work, to explain the story and the meaning behind the art.

Chota use elephants frequently in his work because elephants never forget. And nor should we. I, for one, will never forget Chota, Comuna Trece, or how this city and this country have worked so hard to overcome adversity. 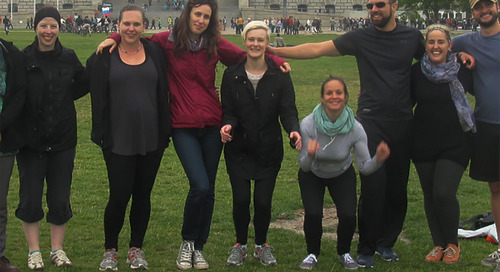 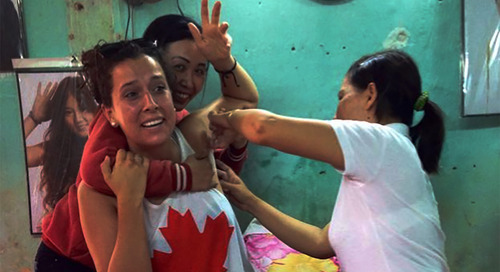 ...and read the story behind her winning photo