“Go past the shop with all the copper pots,” I tell myself.

“Then turn right into the alley with the colourful lanterns on the corner,” I remember next.

“And then it's somewhere down there past all the spice shops.”

I need to remember instructions like these as I explore the old Medina of Fez, the enormously intoxicating Moroccan city with a layout that looks like a scribble. It's so easy to get lost here — just one or two turns and suddenly you have no sense of direction.

Here, in the heart of Fez, the sounds and smells fill the air. The narrow alleys and the tall buildings mean there's not much light. Much of the market area is undercover, anyway, so you can’t use the sun to get your bearings.

The medina — or “old town” — of Fez hasn't changed too much in hundreds of years. True, some of the stalls now sell smartphone cases or electronics, but you're more likely to see a donkey carrying vegetables being led through the lanes. It's because of this authenticity in the planning and use that the Medina of Fez has been named by UNESCO as a World Heritage site.

Morocco has nine World Heritage sites in total, and I've been able to visit them all as part of a challenge to see as many across the planet as possible. I enjoy it because seeing these sites is an interesting way to get a better understanding of the history and culture of the country. Aside from the Medina of Fez, here are the other eight World Heritage sites in Morocco.

One of the most popular cities in Morocco also has one of the most vibrant medinas. Tourists and locals alike gather in the large Jemaa el-Fna square to taste the food and watch the buskers. But head down any of the side streets and you'll soon be amongst markets and houses and a similar chaos to the centre of Fez. If you can find your way to the Ben Youssef Madrasa, it's a stunning building from inside. Along the edges of the Marrakech medina is Bahia Palace and El Badii Palace, both wonderful sites that show the opulence and wealth that once filled this important trading city.

While Marrakech is the kind of city where you can pass a few days exploring the markets, the city of Meknes, not far from Fez, is all about the landmarks. This is the site where the ruthless and ambitious leader, Moulay Ismail, built his capital in the 17th century. The Mausoleum of Moulay Ismail is appropriately grand and the enormous granaries and stables on the edge of town show how wealthy Meknes once was. What really shocked me, though, was going inside the underground prison. Up to 100,000 slaves were chained to the walls at night after working all day building the leader's legacy.

After the hectic warrens of Fez and Marrakech and the grandeur of Meknes, it a might come as a relief to visit the city of Tétouan at the north of Morocco. This is one of the smallest remaining old cities in the country, but is significant because of its proximity to Europe. You can almost see Spain across the water, and historically Tétouan was the link between that country and North Africa. The medina is surrounded by an ancient wall and you can only get in through its grand gates. On Mondays the weekly market is held in the lower streets and the stalls spill out through the gate and into the surrounding area.

Heading south down Morocco's coast, past Casablanca, you get to El Jadida. On an outcrop by the sea is the old fortress of Mazagan. It is miniature compared to the other walled cities listed as World Heritage sites and only takes 30 minutes or so to walk through, but there’s no denying how effective it was. Built by the Portuguese in the early 16th century as an outpost in the trading route down the west coast of Africa, the high walls like cliffs on a coastline with great views across the sea were never penetrated by enemies during the centuries it was in use.

One of Morocco's most scenic medinas can be found even further down the coast at Essaouira. Just outside the main walls is the old port, which is a spectrum of blue — the sky, the sea, the painted boats and even the fishermen's nets are painted blue. It's the old town that has the official heritage significance, but the beach stretching out from it is popular with tourists, too. During the warmer months, you'll find surfers out on the water and camels on the sand. There are many good coastal spots in Morocco and this is definitely one of the best.

Morocco's capital, Rabat, stands in stark contrast to the old cities in the rest of the country. It is a modern and efficient city where wide boulevards run between expansive government properties. However, it is also on the World Heritage list because of the blend of modern imperial palaces built in the early 1900s by the French and the ancient citadels and Islamic structures from 800 years earlier. The old fortress of Chellah on the edge of town is fascinating, even if it is mainly in ruins. The Hassan Mosque looks like it is in ruins, but it is actually unfinished with a lonely prominent tower at one end dominating the scene. The kasbah by the sea at sunset is also a highlight.

Ksar of Aït-Ben-Haddou is in the desert, over the Atlas Mountains, and far from any of Morocco's major tourist cities. There's nothing else quite like it in the country, which makes it a really compelling place to visit. The site is a fortress built in the 17th century from wet dirt mixed with straw and rubble packed together tightly. It rises up a hillside from the dusty plain below it and the best way to explore it is to climb the old steps inside the fortress to the top, up the different levels past the small houses and shops inside the earthen citadel.

Centuries before any of the other World Heritage sites had been built, Volubulis was a large and prosperous settlement that was built by the Romans two thousand years ago as an outpost in North Africa. The fertile lands around it were perfect for agriculture, and the city thrived and was expanded several times. It's in ruins now, but you can still get a good sense of what it would have been like when it was full of people. The public spaces, surrounded by the houses of the wealthy, must have been quite a sight to behold!

Volubilis is a long way from the Medina of Fez — both geographically and culturally. This, again, is part of the charm of Morocco. This North African country with a blend of Islamic and European influences offers opportunities to explore both its history and its modern-day culture.

G Adventures runs a number of departures in Morocco encompassing a wide range of departure dates and activities to cater to different tastes. We’re thrilled at the prospect of showing you this big blue planet of ours — check out our small group trips here. 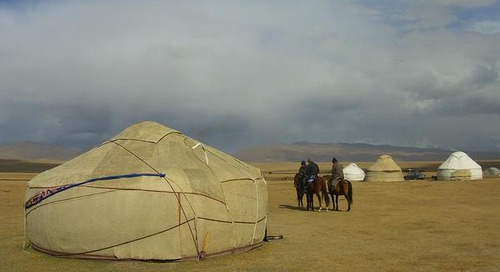 New year, new adventures! So, where to next?bCheck out our top five travel destinations, handpicked by G Ad... 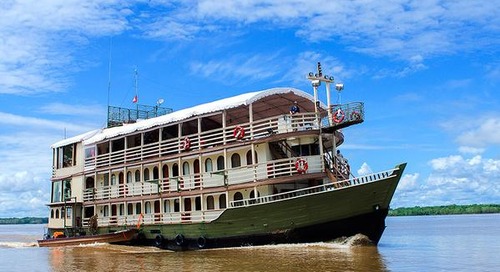 On a river whose size is legendary, hop aboard with Peter West Carey and discover that it’s the little thin...